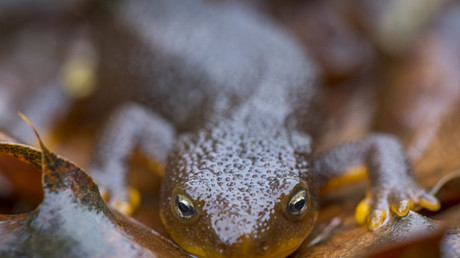 The station’s chief political correspondent, Jon Craig, was left with his credibility up in the air after quoting the satirical website, The Daily Mash, when reporting that Livingstone was quitting the Labour Party amid an ongoing row over anti-Semitism within the party.

While Craig later took to Twitter to announce that he was “very disappointed” to learn that the story “may not be correct,” he did not apologize for the journalistic slip, instead calling it a “shame” that it wasn’t true.

Very disappointed to learn reports that Ken Livingstone has or had a pet newt called Adolf, which I referred to y’day on TV & online, may not be correct. Am now told original source of this claim was satirical website “The Daily Mash”. Shame!

Livingstone quit the party on Monday saying allegations of anti-Semitism against him were “becoming distracting.” In 2016 former London mayor told BBC’s Vanessa Feltz that Hitler’s support for Zionism came “before he went mad and killed six million Jews”. He was subsequently suspended for bringing the party into disrepute.

READ MORE: ‘Don’t let the door hit you on the way out’ – Jewish groups react to Ken Livingstone quitting Labour

Commenting on Livingstone’s resignation as the story broke on Monday, Craig, said of Livingstone: “He is 72 years old, he spends most of his time walking his dog Coco and famously looking after his pet newts. And guess what one of them is called? Yep, Adolf.”

The Daily Mash is a satirical website that pokes fun at a variety of subjects ranging from current events and pop culture to politics and the surreal.

Recent articles include ‘Han and Chewy met on Grindr’,‘House of Lords only senile old bastards in country who don’t back Brexit,’ and, with the recent good weather, ‘Parks haunted by mirage of pretty girls playing good-natured game of rounders.’

So, what you are saying is that you level of fact-checking doesn’t even run to putting your supposed quote into Google and seeing what pops up (https://t.co/9P8Q9VEcMy). I would say that would make you more disappointing than disappointed.

The article in question which duped Craig, dating back to April 2016, claimed “a source close to Livingstone” said the former mayor “currently has four newts named Adolf, Jeremy, Susan and Chairman Mao.”

“They are his best friends. He says ‘Jeremy newt’ is very loyal and would never seek to have him suspended from the British Newt-Keepers Association.”

Reaction to Craig’s tweet has seen it called “an excellent PR nonpology,” while a more despondent reaction claimed that “Real journalism in the UK is now officially dead.”

Real journalism in the UK is now officially dead

MP-turned-pundit George Galloway replied to Craig’s comment that it was a “shame” the story wasn’t true, saying the “shame is on you mate.”

The shame is on you mate

Another, perhaps nicer reaction to Craig’s mistake went: “To be fair, in comparison, @thedailymash is more believable than the Daily Mail.”

To be fair, in comparison, @thedailymash is more believable than the Daily Mail.