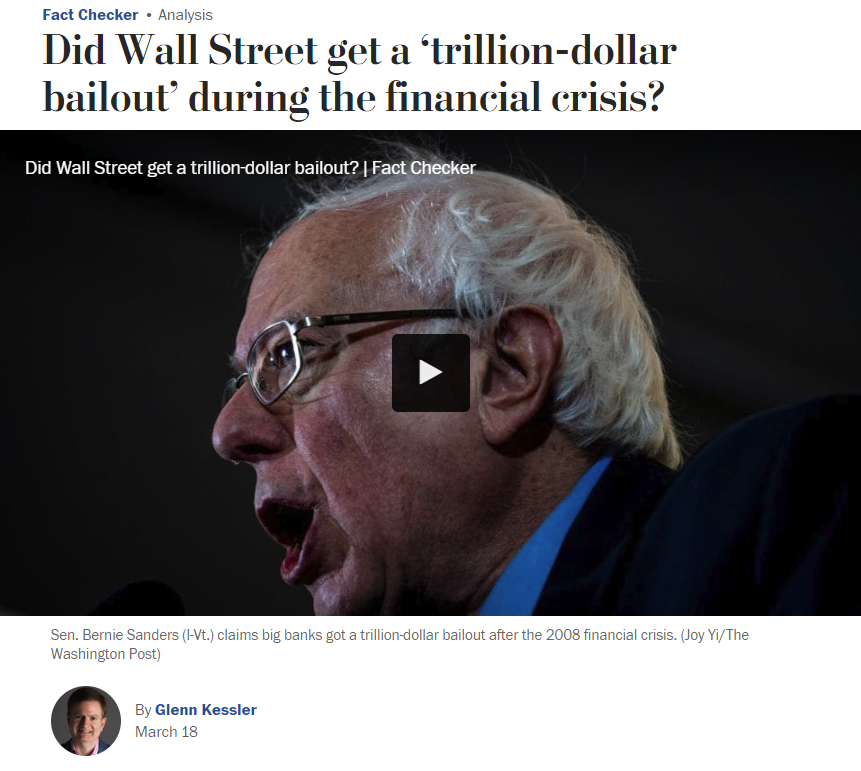 Glenn Kessler, the Washington Post Fact Checker, gave Bernie Sanders “Two Pinocchios” on Monday (3/18/19) for saying that the Wall Street banks got a trillion-dollar bailout. Kessler raises several points of contention: First, whether the Wall Street banks actually got that much money. Second, whether it can really be called a bailout, since the government made a profit on the loans. Third, that the bailout was necessary to keep the financial system running.

Taking these in turn, Kessler points out that the money that went from the TARP to the Wall Street banks, the congressionally approved bailout, was in the low hundreds of billions, far less than $1 trillion. He does note that a much larger amount of loans went from the Federal Reserve Board to the banks. However, the piece points out both that the Fed is nominally independent of the government, and that many of these loans were short-term, so that rolling them over would count twice. (If a bank got overnight loans for $1 billion for a week, this would count as $7 billion.)

Sanders seems on pretty solid ground here when including the Fed loans. First, the reason the Fed has the power it does is because it is the central bank of the United States. It is true that when it was established in 1913, it was set up as a mixed public/private entity, with the banks having a direct voice in setting policy. However, its ability to print an essentially unlimited amount of money is due to the fact that it is the central bank of the United States. All the other major central banks (e.g. the European Central Bank, the Bank of England, the Bank of Japan) are fully public institutions. The fact that the United States allows private banks to have a voice in setting Fed policy doesn’t really change the fact that it is a government institution, and therefore loans from the Fed should be seen as coming from the government.

The fact that many of the loans made by the Fed were very short-term does make adding them up more complicated, but there were many points at which the outstanding loans and guarantees to the banks were well over $1 trillion. In fact, it set up special lending facilities specifically for Bank of America and Citigroup, each of which had well over $100 billion in loans and guarantees at the peak of the crisis in 2009.

As far as the government making a profit on the loans, this is a rather dubious claim. The measure of profit here is the difference between what the banks repaid and the government’s cost of borrowing. The latter was of course quite low, since the government was one of the few secure borrowers in the world at that point. 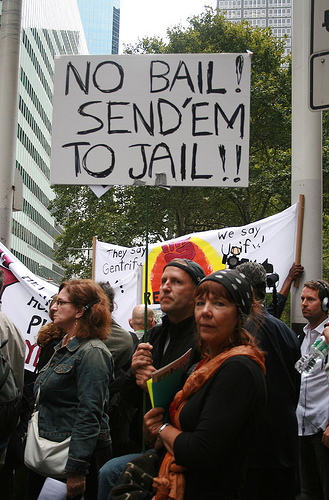 Anyhow, the notion of this being a bailout stems from the fact that these loans were granted at interest rates that were far below the market rate at the time. This allowed banks like Bank of America and Citigroup to stay in business at a point where they would have been pushed into bankruptcy if the market was allowed to work its magic. In fact, then–Federal Reserve Chair Ben Bernanke argued at a Brookings forum last fall that all 13 of the country’s largest banks would have gone into bankruptcy if the market had been allowed to run its course.

The government quite explicitly acted to save the banks from the market. As then–Treasury Secretary Timothy Geithner says repeatedly in his autobiography, they acted to ensure that there would be no more Lehmans. The fact that they charged an interest rate that was above the rate paid on government borrowing is pretty much irrelevant. The interest rate paid by the banks on their loans was far less than the market rate they would have paid at the time in the absence of government support, and, for this reason, can accurately be called a “bailout.”

Finally, there is the issue of whether the bailout was necessary. There seems unanimity from the people who could not see the $8 trillion housing bubble whose collapse led to the crisis that we would have faced a “Second Great Depression” without the bailout. This is hard to see.

The government has a long history of keeping a bank operating through bankruptcy. This is the reason the Federal Deposit Insurance Corporation (FDIC) exists. The FDIC takes over a bank when it becomes insolvent and, for the most part, its depositors never even know anything has changed until they get a note in the mail. Having the country’s largest banks implode would have been a huge burden on the FDIC, and there undoubtedly would have been glitches, but having these glitches imply a Second Great Depression (ten years of double-digit unemployment) involves some very serious hand-waving.

There is little doubt that the initial downturn would have been worse if the market was allowed to work its magic and put the Wall Street banks out of business, but there is nothing that would have prevented a large government stimulus from boosting the economy back to more normal levels of output. It is worth noting, on this issue, that one of the main rationales for the TARP bailout—that the commercial paper market was shutting down—was completely dishonest.

A version of this post originally appeared on CEPR’s blog Beat the Press (3/19/19).