In an era when the president of the United States is an inveterate, habitual, daily liar, about all things great and small, and especially about himself, factchecking sites can provide an invaluable—if increasingly overwhelmed—public service. Though the siloing off of this core function of journalism still presents, I’d submit, something of a moral hazard—the implication being that the existence of a distinct factcheck team alleviates political beat reporters from the responsibility of meticulously calling out spin and falsehoods on a routine basis—there are resource benefits to having a dedicated team focused on separating fact from fiction.

This does not mean, however, that factcheck journalism in the corporate press is free from the institutional pressures of “both sides” objectivity. Precisely because of President Trump’s unprecedented propensity to lie, there can be a latent urge among factcheckers to find similar examples of dishonesty among the left, to provide some semblance of “fairness.” And, at times, these efforts can devolve into obtuse, bad-faith examples of nitpicking and false equivalence. 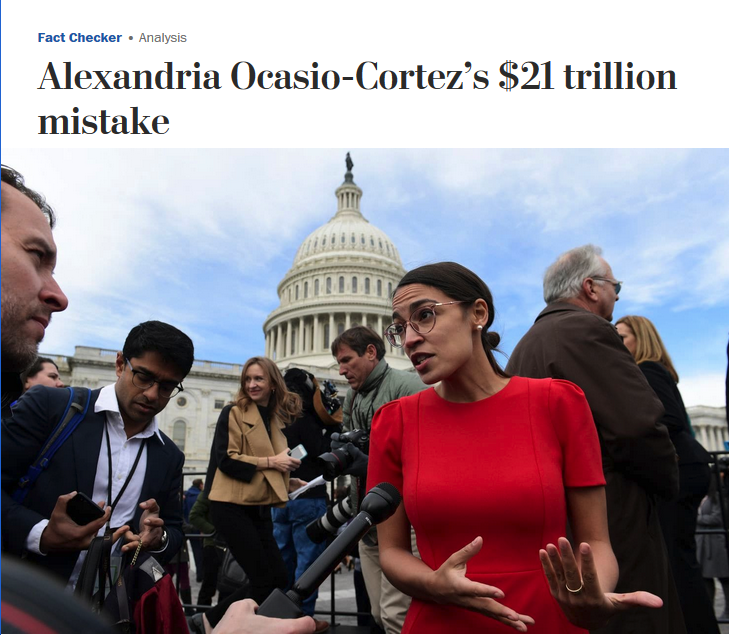 For the Washington Post (12/4/18), misconstruing Pentagon accounting errors is akin to making up millions of illegal voters, or denying the deaths of thousands of  Puerto Rican hurricane victims, or asserting that “white genocide” is happening in South Africa.

Such was the case earlier this week, when the Washington Post (12/4/18) ran a lengthy factcheck about a Sunday tweet (12/2/18) from Rep.-elect Alexandria Ocasio-Cortez. Her tweet, which highlighted an academic study in an exclusive story at The Nation (11/27/18), drew a direct comparison between $21 trillion in unsupported Defense Department budget adjustments over an 18-year period and the projected $32 trillion cost of implementing Medicare for All over the next decade. Roughly 10 hours later—after the post went viral, racking up thousands of retweets (which is common for her)—she replied to the initial tweet with a quote from The Nation story (12/2/18) and a clarification: “this is to say that we only demand fiscal details w/ health+edu, rarely elsewhere.”

The Post’s factcheck headline (12/4/18)  two days later was unquestioningly blunt: “Alexandria Ocasio-Cortez’s $21 Trillion Mistake.” So had Ocasio-Cortez simply made up the $21 trillion number? No. Invented the study? Unfairly singled out the Pentagon? Bungled the math, inaccurately dividing 21 into 36? No, no and no.

Instead, in her tweet, she had failed to properly capture the fact that the missing Pentagon money included both inputs and outlays and, therefore, wasn’t a tranche of lost funds that could’ve been re-allocated to pay for Medicare for All, as she suggested. In fact, the Pentagon’s total budget over those 18 years was $9 trillion. It’s a key distinction, but that missing nuance led the Post to award this “$21 trillion mistake” its worst rating for dishonesty: “Four Pinocchios.”

A bit of important context: Ocasio-Cortez has drawn an extreme level of scrutiny from conservatives of late. Scouring her Twitter feed or informal video chats to single out any slip of the tongue is now a favorite past-time of her right-wing critics. (They do so at their own online peril.) With her massive social media presence and ability to influence online trends, the mainstream press has taken notice as well.

In fact, this latest Post factcheck is the second time the paper has singled her out in the past six months. The first time was back in August (8/10/18), before she was even a member of Congress, and the pedantry was strong. Among its very literal factchecks, the paper judiciously rated it as “false” when Ocasio-Cortez said in an on-air interview about unemployment: “Everyone has two jobs.” Great catch, guys. 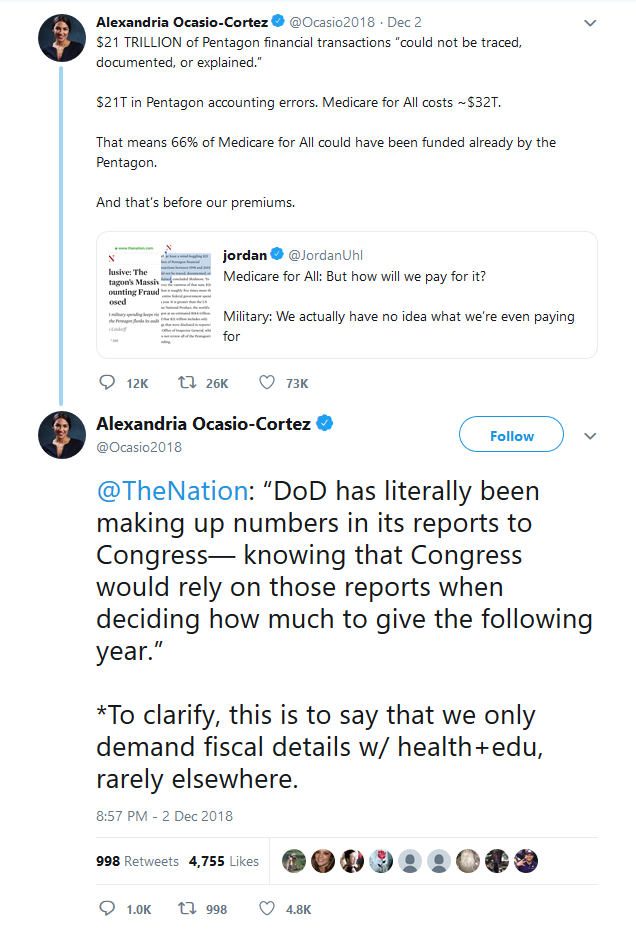 To read the Post’s own explanation in this latest factcheck of Ocasio-Cortez is to realize how wishy-washy and over-the-top its “Four Pinocchios” verdict was. To bolster its claim of egregious dishonesty, the factcheck quotes a passage about the study from the Nation piece (emphasis FAIR’s):

And indeed, the plugs are found on both the positive and the negative sides of the ledger, thus potentially netting each other out. But the Pentagon’s bookkeeping is so obtuse, Skidmore and Fitts added, that it is impossible to trace the actual sources and destinations of the $21 trillion.

The Post then holds up this passage as a damning indictment of Ocasio-Cortez, saying:

But it did not appear in her tweet, which clearly implied that the $21 trillion could have been used to pay for 66 percent of the $32 trillion in estimated Medicare for All costs.

To recap, Ocasio-Cortez did not think to include an somewhat intricate, detailed disclaimer about the unaccounted for Defense spending—of which, again, no one knows how much was really lost—in her initial 280-character tweet (though she did reference the Nation article that explains those details). And her follow-up tweet, which sought to clarify and expand the point that she was talking about broad fiscal-policy priorities, did not lessen the damage in the Post’s eyes, because the initial tweet still stands.

The Post’s factcheck further criticizes her claim by pointing out that the two amounts aren’t apples-to-apples comparisons anyway, since they cover different time periods. This is, simply put, pure pedantry; the federal government routinely reallocates monies from one project to another over varying, different timelines. To claim this as another kind of “gotcha” is just silly. But then, the Post Fact Checker already tipped its hand earlier this summer in its stubbornly pessimistic take on Medicare for All (8/7/18), which joined a broader math-challenged disdain for it among the mainstream press, as FAIR (7/31/18) has noted previously.

But perhaps most noticeable about the Post factcheck of Ocasio-Cortez is its damning verdict. “Four Pinocchios” was warranted, the column concluded, because her “badly flawed” tweet is still up, “probably causing confusion.” Probably. And the Post even acknowledges that Ocasio-Cortez references in her tweet the actual article that gives the missing details and context. No matter.

So does all this really rise to being ranked among the worst of the worst political statements? For comparison, here are a few other claims by President Trump the Post has also rated with “Four Pinocchios”: 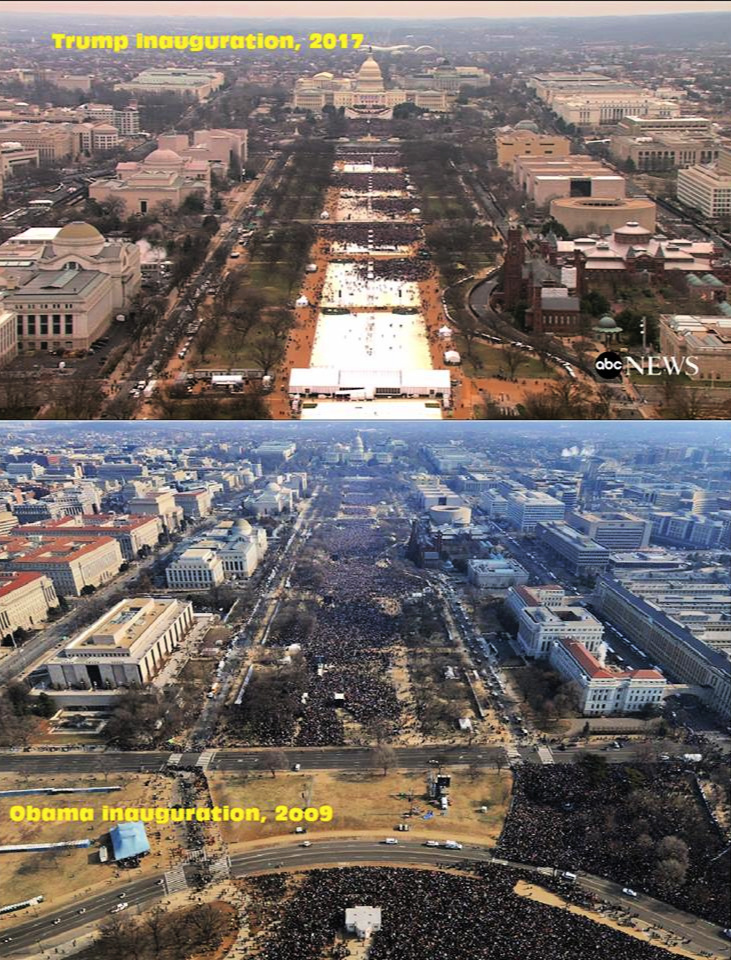 Trump’s insistence that the top crowd was bigger than the bottom crowd got the same rating as Ocasio-Cortez’s tweet.

And finally, from the very first week of his term in office…

So, according to the Washington Post Fact Checker’s journalistic calculus, all of these lies by President Trump—among many others I didn’t bother to list—are just as far removed from the truth as Ocasio-Cortez’s tweet.

Make no mistake, this is an absurd false equivalence. Did she inaccurately enumerate Pentagon waste in a political argument? Certainly. Did she willfully, intentionally and repeatedly attempt to mislead the public, smear minorities, or traffic in racist propaganda or conspiracy theories, as in the above examples of Trump’s rhetoric? The question answers itself.

But it is indicative of not-so-subtle double standard to watch for going forward, especially now that the Democrats will hold majority power in the House. If the sheer volume of lies and misinformation out of the two parties in Washington can no longer be reasonably equated thanks to the president’s pathological dishonesty, then the mainstream press’s “objectivity” model will look for opportunities to match individual grades of dishonesty. Never mind that they will have to torture their own standards of truth and good faith to do it.

The Washington Post factchecking department has a tradition of assigning “Four Pinocchios”—reserved for “whoppers,” not further defined—to statements by progressives and/or Democrats that seem to be mostly or entirely true. Here are a few that FAIR has taken note of: