A week after revealing it had fooled Facebook into giving it approval to run ads in the name of Vice President Mike Pence, DNC chairman Tom Perez, and even the Islamic State terrorist group, Vice attempted the ruse a second time – and found it was just as easy to pose as all 100 US senators using the same approach. 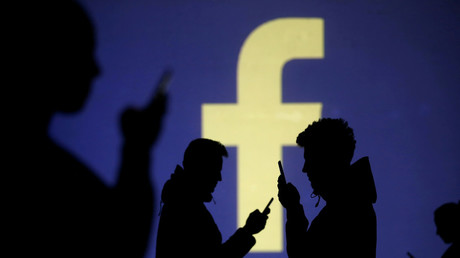 Business Insider, testing the theory, ran two fake ads “paid for by” Cambridge Analytica, the notorious political consultancy that was banned from Facebook after it was revealed they had scraped millions of users’ data without their knowledge and used it to help Trump get elected. The ads, recycled pro-Brexit messages from 2016, passed Facebook’s approval process with flying colors.

Rob Leathern, Facebook’s Director of Product Management, didn’t seem to appreciate the humor of the situation. He protested that the site couldn’t possibly catch all fraudulent ad buys, claiming “We’re up against smart, creative and well-funded adversaries who change their tactics as we spot abuse” – even though Vice used the same tactics to slip its fake ads onto the site a week after revealing those tactics to management. Users should be grateful to Facebook for bringing transparency to political advertising, Leathern said – even when the ads are fake, apparently.

Facebook introduced the “Paid for” feature in May in an effort to prevent abuse of political advertising after the social media platform was blamed for allowing “Russian trolls” to swing the election for Donald Trump in 2016. The site has since partnered with NATO think tank Atlantic Council to further insulate itself against charges of not taking “Russiagate” seriously, yet Vice was able to reuse some of the exact same “Russian ads” from 2016 in its fake ad buys by “Pence” and “Perez” last week.

On the eve of the 2018 midterm elections, we found Facebook’s “Paid for by” feature is easily manipulated and appears to allow anyone to lie about who is paying for a political ad, or to pose as someone paying for the ad. pic.twitter.com/bIFwJHroKn

Business Insider’s ads were taken down after users brought them to the attention of Carole Cadwalladr, the journalist who had initially exposed the Cambridge Analytica scandal in March. Only then did Facebook claim they violated its policies.

It’s not like Facebook is completely asleep at the wheel, though – Vice was blocked from buying any ads in the name of Hillary Clinton or Facebook CEO Mark Zuckerberg.