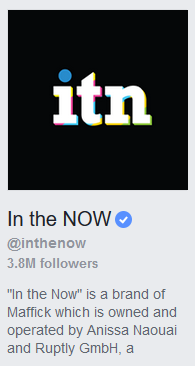 The statement of ownership In the Now was forced to run to be allowed back on Facebook.

There’s a famous polling experiment that asked people in the Cold War-era US:

Do you think the United States should let Communist newspaper reporters from other countries come in here and send back to their papers the news as they see it?

When this question was posed on its own, only 36 percent of respondents said yes. But a separate sample was first asked:

Do you think a Communist country like Russia should let American newspaper reporters come in and send back to America the news as they see it?

When the questions were asked together—reminding people that restrictions on press freedom could be placed on their own country’s journalists, as well as on those of an official enemy—support for allowing access to Communist reporters doubled to 73 percent. (Ninety percent said that US reporters should be allowed to report freely from Russia—suggesting that only a relatively narrow slice of the population openly subscribed to the principle of free speech for me but not for thee.)

I thought of this experiment when Rania Khalek (who’s written for FAIR) told me that the viral video company she works for, In the Now, was taken off Facebook because of its indirect connection to the Russian government. (A majority stake in In the Now’s parent company, Maffick Media, is owned by a subsidiary of RT—a Moscow-based media group that, although organized as a private entity, is funded by the Russian government.) 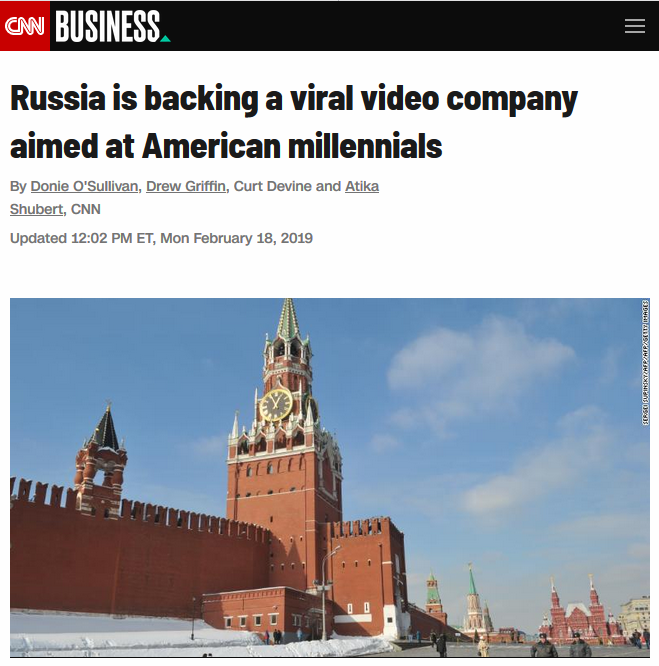 Facebook suspended the page of In the Now, along with three other pages run by Maffick—the current affairs channel Soapbox, the environment-oriented Waste-Ed and the history-focused BackThen—after the social media giant was asked about the RT-connected pages by CNN. CNN (2/18/19), in turn, reported it was tipped off to the In the Now/RT connection by the Alliance for Securing Democracy, a group based at US government–funded German Marshall Fund.

In the Now is back on Facebook again—after a ten-day suspension—and returned with this rather user-unfriendly description:

In the Now is a brand of Maffick which is owned and operated by Anissa Naouai and Ruptly GmbH, a subsidiary of RT.

That’s not particularly helpful if you want to know what In the Now does, of course, but disclosure is good, right? For the goose but not the gander, apparently: Among the US-funded institutions with Facebook pages are, well, the German Marshall Fund. Its description just reads, “Strengthening Transatlantic Cooperation.” Will that page be taken down until the Fund acknowledges where its money comes from?

How about the PBS NewsHour, also funded by the US government? No mention of that on Facebook: Just, “On air and online, the PBS NewsHour provides in-depth analysis of the issues that matter to you.”

NPR’s Facebook page seems to go out of its way to conceal the fact that it’s US government–supported, calling itself “a privately supported, not-for-profit membership organization.” Maybe the P stands for “Private”? 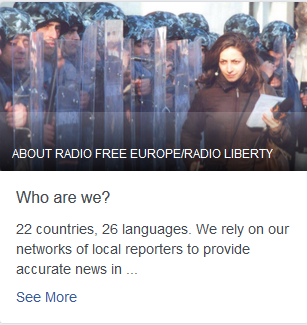 Full-fledged propaganda services are not required by Facebook to reveal their government connections–if it’s a Facebook-approved government.

Even straightforward propaganda outlets of the US government don’t have to identify themselves as such on Facebook. Take Radio Free Europe/Radio Liberty, set up at the height of the Cold War to broadcast the US government’s version of reality behind the Iron Curtain—and still going strong almost 70 years later. Its “About” on Facebook reads:

For those who go the extra mile and click on “See More” under “Who We Are,” you do get this misleading semi-acknowledgement:

RFE/RL is registered with the IRS as a private, nonprofit Sec. 501(c)3 corporation, and is funded by a grant from the US Congress through the United States Agency for Global Media (USAGM) as a private grantee. RFE/RL‘s editorial independence is protected by US law.

The Facebook page of Voice of America, the US government’s main broadcast outlet, is even squirrelier. There doesn’t seem to be any acknowledgement at all that VoA is connected to the US government—just the slogan, “The news may be good or bad. We shall tell you the truth”; the claim that it has “the world’s most interesting stories”; and information on how you can “have the best of VoA News delivered directly to your inbox each day.”

If you’re thinking that Facebook—90 percent of whose customers are not in the United States—should treat Russian-backed outlets differently than US-backed outlets because the US supports peace and democracy, or doesn’t use social media to try to manipulate other nations…. Well, this is why it’s important to get your information from a variety of sources.

But it’s not just US outlets that get to conceal their government funding on Facebook. The BBC doesn’t mention that it’s controlled and funded by the British government—only that its “mission is to enrich your life. To inform, educate and entertain.”

At Al Jazeera English’s Facebook page, you learn, “We are the voice of the voiceless”—not that they are owned by the monarchy of Qatar.

Facebook needs to have one rule for whether government-funded outlets need to disclose their connections. And it needs to apply that rule consistently.