In a bid to counteract negative publicity, social media giant Facebook hired a PR agency to discredit critics by claiming that they were agents of liberal billionaire George Soros, a New York Times report has revealed.

Facebook hasn’t been the most popular company as of late. Repeated privacy and data-leaking scandals followed by half-hearted apologies, and an ongoing effort to clamp down on alternative news pages have kept Facebook and its CEO Mark Zuckerberg in the headlines for all the wrong reasons this year.

The backlash was visible at a House Judiciary Committee hearing in July, when protesters held up signs depicting Zuckerberg and Chief Operating Officer Sheryl Sandberg as giant octopuses, with their tentacles encircling the globe. Facebook complained to the Anti-Defamation League, who called the posters “a classic anti-Semitic trope.”

Depicting Jews as an octopus encircling the globe is a classic anti-Semitic trope. Protest Facebook — or anyone — all you want, but pick a different image. https://t.co/9vvwygloWo

Behind the scenes, Facebook prepared to meet the protesters on their level. When combating protest from activist groups like Freedom from Facebook and Color of Change, Facebook hired Definers Public Affairs – a Washington DC PR firm – to smear and discredit its critics, according to a New York Times report published Tuesday.

The agency cast billionaire liberal financier George Soros as the puppet master behind the opposition to Facebook. It circulated a document this summer connecting Soros to the anti-Facebook movement, and pressed journalists to look into financial links between the billionaire and the activist groups.

Daily Caller journalist Joe Gabriel Simonson recalled being contacted by “a PR guy” who kept “bringing up Soros.” Simonson was encouraged for one article to link Soros with Latino protesters complaining about Facebook requiring proof of ID to buy political ads.

“It was odd and we didn’t end up going with that angle,” he tweeted on Wednesday.

As well as pushing the Soros-did-it angle to the press, the Times claims that Definers wrote their own articles bashing rival tech companies, including Google and Apple, and publishing them on NTKNetwork.com, a site designed to look like a news site. Facebook denied ever requesting that Definers write such hit-pieces, and severed its ties with the company late Wednesday night.

Facebook’s labeling of Soros as the boogeyman was not a random decision. The billionaire has been a vocal and public critic of Facebook, which he described, in a speech at the Davos economic forum this January, as a “menace” to society, that has “neither the will nor the inclination to protect society against the consequences of (its) actions.” 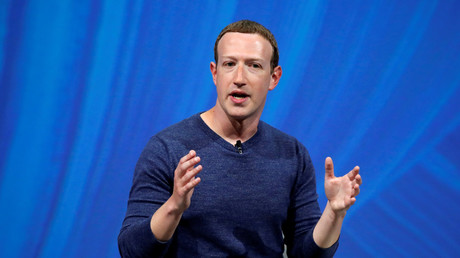 To that end, Soros has indeed financed some anti-Facebook initiatives. Color of Change director Rashad Robinson told the Guardian that his organization, which has run online campaigns accusing Facebook of racial discrimination, privacy violations, and hate speech infractions, is partly funded by Soros.

Robinson sees Facebook’s targeting of Soros – who is Jewish – as anti-Semitic.

“This narrative has really dangerous anti-Semitic undertones about Jewish people controlling the world,” he told the Guardian. “It’s also deeply anti-black – the idea that our strategies, our ideas, our vision are somehow built off some puppet master… That Facebook would employ a right-wing firm to say that is deeply troubling.”

Soros, an investor who made his fortune shorting the British Pound in 1992, has attracted persistent criticism for funding liberal causes worldwide. Soros’ pro-migration lobbying has seen his Open Society Foundations NGO expelled from his native Hungary. His organization has funded protests against Supreme Court Justice Brett Kavanaugh in the US, and President Trump has said that he “wouldn’t be surprised” if Soros had been financing Central American migrant caravans surging toward the US border.

Soros’ defenders have repeatedly argued that the depiction of him as a liberal ‘puppet master’ is a thinly-veiled anti-Semitic slur – despite the fact that Soros has also been called an “enemy of Israel” by Israeli Prime MInister Benjamin Netanyahu, for his work opposing Israel’s mass deportations of African asylum seekers.

Journalist Tim Miller called the criticism of Soros “a good sign of the moral rot on the right,” before the New York Times report revealed that Miller had taken a job with Definers to spread the same rot he complained about on Twitter.

Holy shit. This is the #NeverTrump/GOP operative @PodSaveAmerica commentator who the NYT just revealed secretly worked for Facebook to depict liberal critics of the company as Soros puppets. Look at what he just tweeted less than two weeks about those who do what he was doing: https://t.co/HFiNeuCth6

In a blog post detailing its relationship with Definers, Facebook said that, while it asked the agency to encourage the press to investigate the link between the anti-Facebook campaign and a “well-known critic of our company,” it did not spread misinformation.