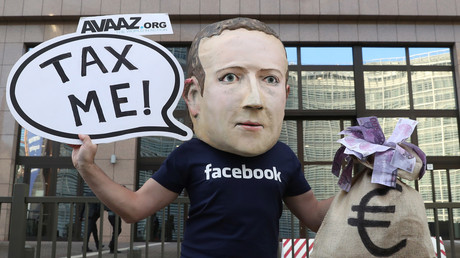 Facebook has opted to purge its platform of all sex-related content with a new policy banning everything from nude pictures to “sexualized slang,” up to and including “vague suggestive statements” – without informing its users.

The new “sexual solicitation” rules were adopted in mid-October, according to PCMag, and forbid everything from pornography to “implicit sexual solicitation.” The latter term is purposefully vague, encompassing “vague suggestive statements, such as ‘looking for a good time tonight,’” discussion of “sexual partner preference,” content (including hand-drawn art) that depicts “suggestively posed persons,” and even the use of “sexualized slang.”

Also on rt.com
Police detain 270+ in Paris ahead of mass Yellow Vest protests

You read that correctly – Facebook doesn’t want to provide a platform for sex between consenting adults, or otherwise harbor the idea that sex can be anything other than exploitative and misery-inducing.

A company spokesperson claims it was Facebook’s human content reviewers who requested the new policy, claiming “the sexual exploitation policy did not adequately distinguish between exploitation (e.g. ‘My ex was a slut. Look at the photos she sent me.’) and solicitation (e.g. ‘Looking for swingers. Friday at 8 PM, [name of bar]. Wear pink.’) and solicitation.” The company has expanded its human workforce following user complaints that algorithms were flagging legitimate content for takedown – including classic works of art and the American Declaration of Independence.

More disturbing than the rules themselves is Facebook’s silence with regard to informing its users that a large portion of their speech – nearly all Facebook users have deployed a sexual innuendo at some point in their lives – is now illegal. Shortly after this rule was adopted, Facebook purged hundreds of pages, seemingly without rhyme or reason, dismissing the deleted accounts as “spam” without any sort of due process for the affected users, some of whom had millions of followers. The revelation of this policy two months after the fact raises the disturbing possibility that rules like this could be used as justification for further purges.

A Facebook spokesperson declined to address users’ concerns that the new rules were overly broad, but told PCMag that the site had “crafted the new rules with input from third-party organizations that specialize in women’s and children’s safety issues.”

Knee-deep in scandals, Facebook nevertheless seems determined to keep alienating its users. Company executives promise transparency that is never delivered: “We’ll be putting out the minutes from our policy development meeting… and we’ll also publish updates to our Community Standards so that people can track changes over time,” a spokesperson told PCMag, conspicuously leaving out the part where users have any input into the policies. Every week seems to bring a new revelation about how Facebook violates their privacy and monetizes their social lives. Yet users cling to the platform with an unflinching masochism, because “that’s where their friends are.”