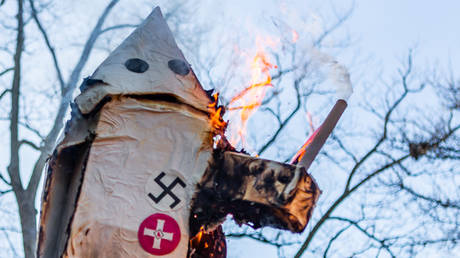 In the video, four high-school students trade racist banter, plastic cups in hand, seemingly unconcerned that they are being filmed.

“If the holocaust had never happened, Jews would be running the world right now!” one boy declares. “F*** n****rs, f*** Jews!” another inebriatedly agrees, while a girl protests, “Jews are fine, ‘cause they’re white – we just need n****rs gone.”

They debate various methods of extermination – “stick them in a concentration camp and starve them” vs. “you have to wait til they die off” – and move on to nonsensical political comparisons – “Republicans are n***ers that want to take white people’s money” – before the video ends.

Twitter users quickly posted the students’ names, adding that they attended Spain Park and Hoover High schools, both in the Hoover area south of Birmingham, and posting the names of the colleges which they were due to attend.

Damage control began in earnest, with two of the kids posting apologies – with conflicting stories – and begging the original poster to remove the video. A third insisted that just because he had filmed the whole thing didn’t mean he was guilty. Even the girl’s father got in on the groveling.

“We are exceptionally sad and disappointed that this would either be the attitude of some of our young people or whatever would prompt them to have such conversations,” Hoover Superintendent Kathy Murphy told Al.com after a conference call Monday morning with principals from both schools, during which she confirmed the students in the video were in fact enrolled in the system.

However, because the video was filmed off school property, any punishment would have to reflect the “residual impact in the school itself,” she added.

Spain Park High deleted its Twitter account amid the scandal, while many took pleasure in the possibility that the noxious video would follow its subjects around for the rest of their lives.

So we already have two excuses so far, 1) he did it to rile her up. 2) she did it to be dramatic.

I hope whatever colleges they apply to do simple Google searches to see what type of students they might be welcoming in to their schools.

Wait till their future employers see this

Well, you can hear the southern twang…oh children this is going to come back to haunt you.