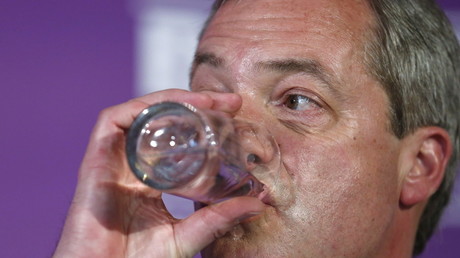 Nigel Farage opened up about his ‘liver-damaging links’ to Russia while speaking at the Conservative Political Action Conference (CPAC) in Washington on Friday, confessing that he has tossed back a few vodkas over the years.

Noting that he was reportedly a “person of interest to the FBI,” Farage marveled at conspiracy theories linking himself to a shadowy Kremlin cabal tasked with undermining Western democracy.

“I’ve read that actually I’m the center of an international spider’s web,” Farage, a vocal Trump supporter credited with Brexit’s referendum victory, sarcastically said. “I’m the one person connecting Trump, Putin and Julian Assange. I’ve been running memory sticks back and forth, from the White House to the Kremlin, to Assange.”

READ MORE: Farage in the USA: ‘In the UK, people are beginning to get the Trump message’

During an interview with Fox News on Thursday, Farage also mocked “newspapers in America and the UK” who “say I colluded with the Russians.”