Former Abu Ghraib detainees say time has not fully healed the physical and mental pain they suffered at the infamous US prison. Iraqis spoke with RT on the 15th anniversary of the US-led invasion of their country. 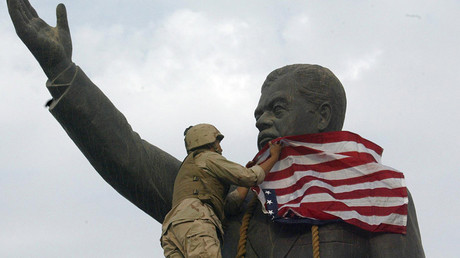 “The time I spent in that prison felt like a lifetime. An hour of that pain, humiliation, and injustice stays with you forever,” Anwer Al-Sudani, a former Abu Ghraib detainee, told RT.

Once used by Saddam Hussein to lock up political dissidents, Abu Ghraib prison was converted into a US Army detention facility shortly after the US-led invasion of Iraq in March 2003.

In April 2004, photographs showing prisoners being subjected to torture, sexual humiliation, rape, and other forms of abuse at the hands of US soldiers were leaked to the press.

The facility, located about 20 miles west of Baghdad, held as many as 3,800 detainees at the height of its use by the US military. In 2006, all remaining detainees at Abu Ghraib were transferred to other prisons, and the facility was handed over to the Iraqi government. More than a decade has passed since the US relinquished control of the infamous prison, but former inmates say the physical and mental scars from their time at the facility have not yet healed.

“I still have nightmares and suffer physical and mental pain, as if it all happened yesterday,” Ali Al Qasi, a former inmate at the prison, told RT.

I work night and day to try to forget it. What we went through, and what happened to Iraq, was a terrible crime. It broke us. Even now I can’t get inside a bathtub because it makes me think of waterboarding.

“After I was released, whenever I saw Americans on the street, I would be terrified they would send me back to that place and torture me again. It still keeps me up at night, remembering the torture. I hear the screams,” Emad Al-Lamy, another former detainee, told RT.

“They would hang a prisoner on the metal door of the cell, and subject him to electrocution or urination. They would stick a rifle into sensitive areas, or they would use a broken broomstick, causing internal bleeding. Prisoners would need surgery,” Al Qasi recalled.

According to Al Qasi, every person who was detained at the facility, including children, “was subjected to violations, torture, sexual abuse, humiliation, rape, and lots of other bad things.”

I saw a child; they raped him in front of his father. These interrogators [were] by the contractors, they committed horrible crimes. I can never forget the electrocution too. It almost felt as though fire would come out of my eyes. I don’t know. It’s something you can’t forget.

According to Major General Antonio Taguba, who led the formal inquiry into prisoner abuse at Ab Ghraib, an estimated 2,000 photographs taken at the infamous prison and six other facilities across Iraq and Afghanistan depict“torture, abuse, rape, and every indecency.”

Taguba’s internal inquiry into the abuses at Abu Ghraib included sworn statements by 13 detainees, which he described as “credible based on the clarity of their statements and supporting evidence provided by other witnesses.”

Among the graphic testimonies, which were later released under Freedom of Information Act requests, is that of Kasim Mehaddi Hilas, who said: “I saw [name of a translator] ******* a kid, his age would be about 15 to 18 years. The kid was hurting very bad and they covered all the doors with sheets. Then when I heard screaming I climbed the door because on top it wasn’t covered and I saw [name] who was wearing the military uniform, putting his **** in the little kid’s ***… and the female soldier was taking pictures.”

In 2009, the Obama administration defied a court order which called for the release of the photographs. At the time, then-President Obama justified the decision to withhold the photographs by stressing that “these photos that were requested in this case are not particularly sensational,” adding that “the most direct consequence of releasing them, I believe, would be to inflame anti-American public opinion and to put our troops in greater danger.” 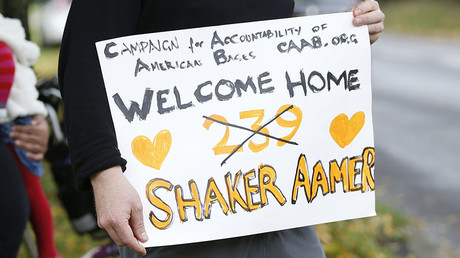 The torture and abuse suffered by detainees at the prison fueled anti-American sentiment in Iraq, giving rise to a deadly insurgency which later formed Islamic State (IS, formerly ISIS).

Al Qasi told Ruptly that if only one percent of what is spent on the war in Iraq was used to help rehabilitate victims of US torture and abuse, “there wouldn’t be terrorism in Iraq.”

“We need a center for rehabilitation of former detainees. Physically and psychologically, to help them cope with life, to get back their rights,” he added.

“When the Americans came in, with their tanks and everything, we thought they would rid us of this unjust regime. Everyone would have his home, his car, just like good Arab countries, or the West even,” Al-Lamy told Ruptly. “But it turned out to be the opposite. They were evil killers of Muslims and everyone. The octopus of the world is American. The world’s top criminal is the United States. We realized we had misunderstood it.”

Fifteen years after the second US-led invasion, Iraq has yet to see a day of peace. Donald Trump has become the fifth straight American president to bomb the country.