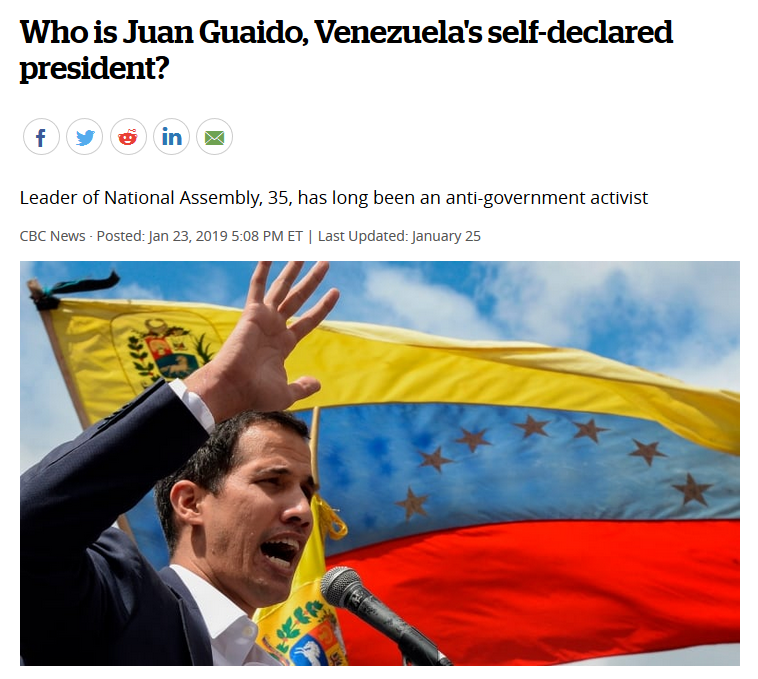 The CBC (1/23/19) answers its question by saying he comes from a a “centrist social-democratic party.”

The Trump administration seems to have found their man in National Assembly leader and self-appointed president of Venezuela Juan Guaidó. Guaidó has been extremely attentive to US interests, promising to allow US oil companies to increase their activity in Venezuela. He has also pledged mass privatizations and harsh rounds of austerity, as FAIR contributor Ben Norton reported (Mint Press News, 1/24/19). Having met with and secured the support of the Trump administration before he acted, the previously unknown 35-year-old emerged as a prominent opponent of the leftist government, championed by right-wing nations in the region keen to see the end of President Nicolás Maduro’s administration.

Despite this, or rather precisely because of it, the media are presenting Guaidó not as a conservative (or further still to the right), but as a centrist social democrat who can unite a fractured nation. CBC (1/23/19) and Forbes (1/24/19) both described him as a “centrist social democrat,” the former adding that he is also an activist and a “salsa-loving baseball fan.” Others went further, claiming that he and his party are “center left” (Reuters, 1/24/19) or even “socialist” (London Independent, 1/24/19). The New York Times (3/4/19) claimed, more broadly, that Gauidó had “captured the heart of the nation” and that “a vast majority of Venezuelans support him.”

In reality, Guiadó’s Popular Will party has always represented the most radical right-wing elements of the Venezuelan opposition, perhaps the reason that Fox Business’ Trish Reagan (1/29/19) eagerly endorsed him as a “freedom fighter leading his country to democracy” amid “massive cheers from the people.” Popular Will has consistently favored confrontation and violence over negotiation; a recent opposition plan to amass an army of 200 soldiers to shoot their way across the border to bring Guaidó back into Venezuela after an overseas tour was only stopped by a panicked Colombian government, according to Bloomberg (3/6/19). 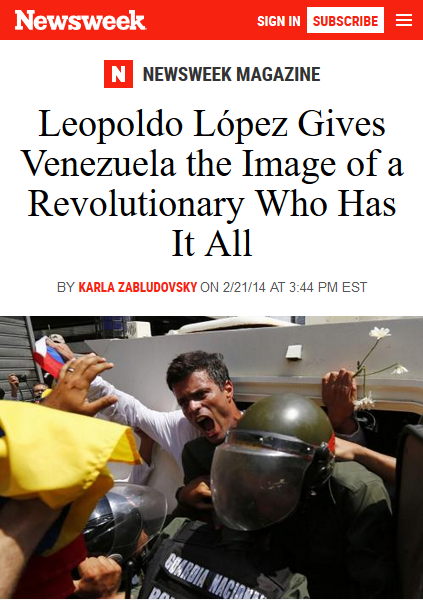 Newsweek (2/28/14) describes Leopold Lopez, the organizer of deadly opposition protests, as “charismatic, athletic and good-looking” and the owner of “impossibly adorable Labrador puppies.”

But Guaidó is merely the latest in a long line of Washington-backed Venezuelan conservatives the media has sugar-coated. Leopoldo López, a Harvard-educated “hardliner” (London Independent, 4/11/14; Guardian, 3/4/14) who led a wave of demonstrations in 2014 aimed at removing Maduro by force that left 43 dead, including some passersby beheaded with razor wire, was a darling of the press. The Washington Post (2/18/14, 3/29/14) described him as a “courageous,” “left-leaning” “moderate,” while Newsweek (2/28/14) discussed his “twinkling chocolate-colored eyes and high cheekbones.”

Venezuelan opposition presidential candidate Henrique Capriles’ 2012 campaign platform advocated privatization or increased business influence across the country, in schools, the oil industry, healthcare, water and electricity, promising to work closely with the IMF and World Bank and to re-design the national curriculum at all levels to teach “the connection between property, economic progress, political liberty and social development.”

Nevertheless, Capriles presented himself as a social democrat, and the media followed suit. He was described as a “moderate” (New York Times, 2/24/14; Washington Post, 3/11/14) or even a “center-left reformer” (Miami Herald, 4/11/13), and a disciple of popular Brazilian democratic socialist President Lula da Silva (London Times, 3/8/13; Daily Telegraph, 4/7/13). This despite the fact that Lula had declared it “absurd” that he would support Capriles, and even campaigned against him and for Hugo Chavez.

Perhaps the most egregious Venezuelan example of this phenomenon was during the briefly successful US-backed coup of 2002. As business mogul Pedro Carmona was installing himself as a dictator, dissolving the constitution and firing every elected official in the country, declaring that he could rule by decree—and while hundreds of people were killed, imprisoned or publicly tortured—the New York Times (4/13/02) presented him as a savior. The paper editorialized, “Venezuela is no longer threatened by a would-be dictator”—meaning Chávez. Elsewhere (4/13/02) it called Carmona a “respected business leader” and a “level-headed” and “meek” “conciliator,” uninterested in personal power.

An iron law of journalism

This phenomenon of presenting any political figure Washington approves of as a centrist, moderate or other positively charged words is hardly confined to Venezuela. In fact, it is virtually an iron law of journalism that descriptions of US government-friendly groups will be designed to signal readers that they deserve support.

For instance, Guaidó was described (New York Times, 3/3/19) as enjoying support both from right-wing governments and Ecuador’s “center-left president,” Lenin Moreno. This is a highly questionable framing of Moreno’s position, considering that  immediately after being elected, he offered to work with right-wing parties, cut the salaries of government employees, met with Trump officials to discuss handing over WikiLeaks’ Julian Assange (living in asylum in Ecuador’s London embassy) and very publicly went to war with his predecessor and former mentor, leftist President Rafael Correa. Even the Financial Times (1/2/18) noted that he was “unpicking Ecuador’s left-wing legacy.” However, this has met with approval in Washington, hence his subsequent  designation as “moderate” (Financial Times, 12/28/18; Washington Post, 2/5/18).

Going back to the 1980s, the Washington-backed far-right Contra paramilitaries in Nicaragua were referred to as the “equivalent of the founding fathers” by President Ronald Reagan (New York Times, 3/2/85) and as “moderates” in the media  (e.g., LA Times, 2/20/85).

The US-backed administration of El Salvador’s José Napoleón Duarte presided over some of the worst massacres and human rights abuses in Central American history. Yet the New York Times (6/8/88) presented Duarte as a “decent democrat” “deserving of sympathy and appreciation,” who was “beset on the left by dogmatic Marxist insurgents and on the right by death squads.” By conveniently ignoring Duarte’s links to those same right-wing death squads, the Times was able to present him as “holding the center ground” and being a “moderating” influence in Salvadoran politics, rather than a perpetrator of the violence.

Meanwhile, the label “moderate” was used by the Christian Science Monitor (2/6/87) to describe Indonesian military dictator General Suharto, who presided over a genocide against ethnically Chinese Indonesians in 1965–66 (FAIR.org, 10/18/17), and again in East Timor after 1975 (Extra!, 11–12/93). What made Suharto’s mass killing “moderate,” of course, was the active support of Washington (Extra!, 9–10/98).

Indeed, even Hitler himself was approvingly described by the State Department in 1937 as a “moderate” between the extremes of the German left and right. Leading news outlets likewise saw “a new moderation in the political atmosphere” of Nazi Germany (New York Times, 3/7/33) or “indications of moderation” on Hitler’s part (Philadelphia Daily Bulletin, 1/30/33; both cited in Daily Beast, 12/20/15). 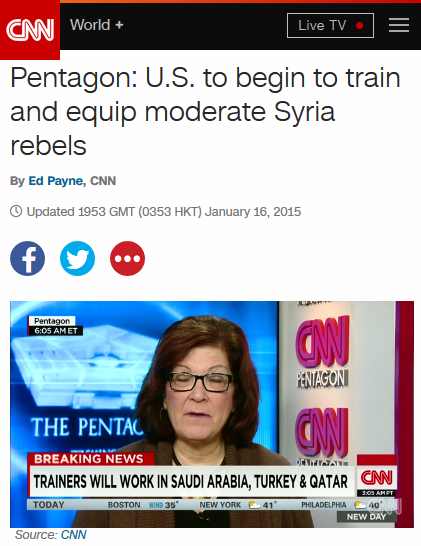 The most notorious recent example of the media wishfully finding moderation is surely the case of Syria, where US-backed rebels are often prefixed by the term “moderate” (CNN, 1/16/15; NPR, 4/8/17; Wall Street Journal, 5/28/14) to distinguish them from jihadist groups like Al Qaeda/Al Nusra, Washington’s official enemies, although the line between them is frequently blurry, as Gareth Porter (FAIR.org, 3/21/16) has previously exposed. “Moderate” groups often work hand in glove with extremist forces. The Washington Post (2/19/16) admitted as much when it noted that moderate rebel forces were “intermingled” with jihadists, making negotiations problematic.

Very often, terms like “moderate,” “centrist” or “democrat” are not used in media to refer to any particular political outlook, but rather are used as a framing mechanism to convey the media’s approval—which usually depends on US government support. Regardless of their actions or political outlook, groups with media and official endorsement will be rewarded with such monikers.

In contrast, those media disapprove of will be denied such titles. Alexandria Ocasio-Cortez is dismissed as part of the “loony left” (Washington Post, 2/13/19), and Bernie Sanders is described as “far-left” (Detroit News, 3/18/19), largely on the basis of his support for Medicare for All. Though Ocasio-Cortez’s core platform enjoys widespread public support (FAIR.org, 1/23/19), and Medicare for All has gotten as much as 70 percent support in polls (The Hill, 8/23/18), these sorts of politicians are never going to be granted the “moderate” seal of approval.