George Galloway told RT the UK will “rely upon pre-cooked open source intelligence from terrorist groups,” amid accusations from the Russian military that the White Helmets have faked footage of a concocted chemical attack.

Responding to Labour’s shadow foreign secretary, Emily Thornberry, who urged the government to verify any chemical attacks in rebel-held parts of Syria before taking military action, Galloway warned that their refusal to do so shows the government’s “ill intentions.” 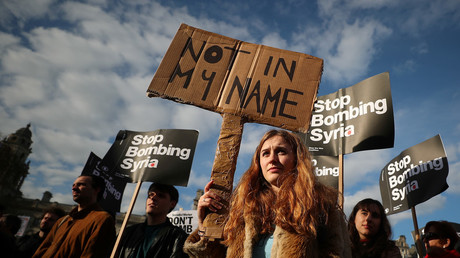 “I’m expecting the British government to take advantage of Parliament being in recess. And I’m fully expecting the film [of a reported chemical attack – that has already been filmed – to be released. And the consequences threatened by Trump to be activated,” Galloway stated in reference to allegations from the Russian Reconciliation Center in Syria that a number of Middle Eastern TV channels and a regional affiliate of a US broadcaster “have shot nine videos in Jisr al-Shughur city in Idlib province of a staged chemical attack” that will be blamed on the Syrian government.

Thornberry asked that the government not rely on “open source intelligence provided by terrorist groups” on chemical attacks in Syria. She was subsequently attacked for smearing open sources in Syria.

On the claim that open-source information on the Syria War originates from NGOs and civil councils, Galloway said “this is nonsense, unless you count the White Helmets as an NGO. The evidence to the contrary is overwhelming.”

Former Labour MP George Galloway, who made a name for himself in his opposition to the Iraq War, warned that the Tory government has “abandoned a British parliamentary norm” by consistently not seeking parliamentary approval for military action. “There is no mystery as to why; they don’t want to have to argue in Parliament, against an opposition, about this so transparent false-flag operation.”

Comparing the Syrian conflict to the Iraq War, Galloway said the ongoing fighting was even worse than the US-led overthrow of Saddam Hussein. “We are openly – on 9/11 – in support of Al-Qaeda. Nobody pretends that the militants inside Idlib are anything other Al-Qaeda. Even Tony Blair wouldn’t have been able to persuade to go to war for Al-Qaeda.”

Galloway labeled Britain “the rat that followed the elephant, feeding from its droppings; it’s partly the wish from the British to cling on to some imperial importance, it’s partly a diversion from very difficult problems at home, and it’s partly due to the internal politics of the Conservative party. Theresa May could face a leadership challenge soon and it’s very difficult to rock the boat when the nation is at war.”