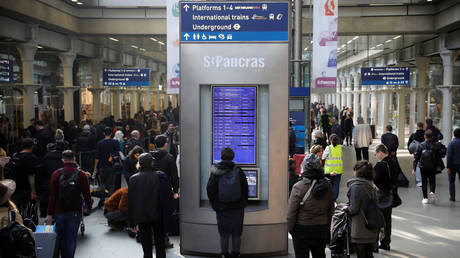 Eurostar services from London were suspended Saturday morning after a man climbed onto the roof of St Pancras station and stayed put overnight, sparking a major security alert and disrupting thousands of travelers.

British Transport Police tweeted that the incident kicked off on Friday evening, saying there was a man “in a precarious position” at the city center station. St Pancras is home to Eurostar services into and out of England.

One local shared an image of a man on the roof of the site, waving what appeared to be a St George’s Cross flag – the national flag of England. Others took to social media to show the huge crowds and queues of people waiting to board the Eurostar.

Wanna know why St Pancras and all the trains are messed up? The flag waving bell-end is on top of high speed tracks. pic.twitter.com/2U2g5TAR3I

Just after 7pm officers were called to a man in a precarious position at St Pancras. They, along with colleagues from other emergency services, are working to resolve the situation as soon as possible. Thank you to everyone whose journeys have been disrupted for your patience.

Eurostar tweeted that its services were suspended while emergency services attended the incident, advising people due to travel on Saturday morning to cancel their journey. Just before 9am local time, the company said it would soon restart its trains after the man had been arrested. Southeastern rail services were also affected by the incident.

According to police, a 44-year-old man was arrested for “trespass and obstruction of the railway.”

The trespasser on the tracks outside of St Pancras has been apprehended and our services will be able to start to run in the area again soon. We would still recommend you not travel this morning and please cancel your journey or exchange ticket free at https://t.co/WjpMDbcrUZ

A 44 year old man has this morning been arrested for trespass and obstruction of the railway, having spent the night on the roof of St Pancras Railway Station. pic.twitter.com/OrdVzuuHpb

Also on rt.com
Refugee killed by electric bolt while attempting to smuggle aboard Eurostar train