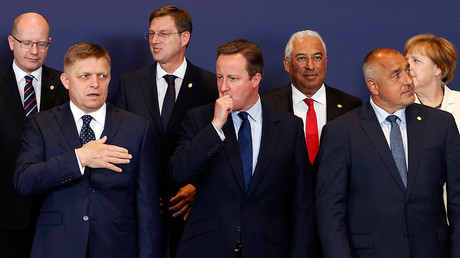 Prime Minister David Cameron and UKIP’s Nigel Farage have both blamed Brussels for tipping British anti-EU sentiment over the edge and causing Brexit. RT asks if the EU is at fault for last week’s historic upset.

Now that the initial shock of Brexit is beginning to settle across Europe, politicians across the continent are looking for who to blame for Britain’s dramatic decision to quit the EU.

A growing number of voices are saying the EU itself is responsible for the historic vote, which threatens to drag Britain and Europe into a mini-recession.

Here are some of the arguments being floated.

Speaking at his last Brussels summit on Tuesday, Cameron pinned Brexit squarely on the EU’s failure to offer Britain a good enough deal during the series of negotiations held prior to the referendum.

Speaking at a dinner of European leaders, the PM reportedly claimed he could have won the referendum if the EU had granted Britain power to use an “emergency brake” on migration.

Cameron said there was a “sense there was no control on immigration or free movement.”

The PM initially pressed for curbs on EU migration during the talks, but was told by German Chancellor Angela Merkel that freedom of movement within Europe was not open to negotiation.

A Downing Street source said Cameron told leaders that “the key to [Britain] staying close [to the EU] is really to look at reform to free movement and how do you address that issue.”

He added this is despite the fact that immigration “only has a direct negative impact on one in five of the population.”

Cameron fell on his sword following the EU referendum result. Now some are calling for European Commission President Jean–Claude Juncker to do the same.

“He is not the right person for that position,” Zaorálek said on Sunday.

“We have to ask who is responsible for the result of the referendum in Britain.”

The leftist leader of Syriza said Brexit was caused by the “chronic deficiencies” of European leaders and their insistence on austerity policies, which have fueled populism and nationalism.

Across Europe anti-establishment parties on the left and right are growing in momentum and support, with many gaining traction from espousing Euroskeptic or downright anti-EU ideas.

In Italy, the Euroskeptic Five Star Movement recently won victories in the mayoral contests of Rome and Turin.

In France, the Netherlands, Austria, Denmark and even Germany, right-wing Euroskeptic parties are gaining in popularity.

Harvard professor Manuel Muñiz described Brexit as an example of the anti-elite mood gripping the world at the moment.

Writing in Social Europe, the Spanish lawyer quoted Tory Justice Minister Michael Gove, who declared during the referendum campaign that: “People in this country have had enough of experts.”

Harvard professor Manuel Muñiz described Brexit as an example of the anti-elite mood gripping the world at the moment.

Writing in Social Europe, the Spanish lawyer quoted Tory Justice Minister Michael Gove, who declared during the referendum campaign that: “People in this country have had enough of experts.”

“The elite political class’s intellectual arguments failed to resonate with large segments of British society because they misread the country.

“They apparently believed that the same arguments that appealed to the younger, wealthier urban classes in London and Scotland would be sufficient to convince the rest of Britain of the value of the EU.”