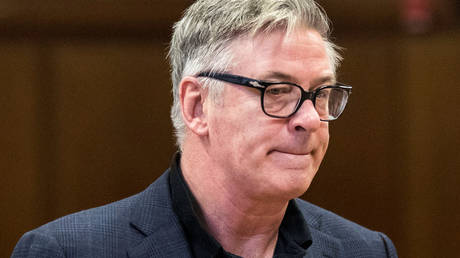 Alec Baldwin often plays Donald Trump on SNL, but the actor was compared to the president in real life in a lawsuit seeking damages for a fight over a parking spot.

Baldwin is accused of hitting Wojciech Cieszkowski in an argument over a parking spot outside his Greenwich Village building in November. Cieszkowski pulled into a parking space, apparently sparking an altercation with Baldwin, who apparently wanted the spot for himself.


“Like the man he plays on television, Alec Baldwin is an entitled celebrity with a long history of verbally and physically mistreating others he sees as beneath him,” Cieszkowski’s lawyers, Douglas Lieb and Jonathan Abady, wrote in a lawsuit that is to be filed in  Manhattan Supreme Court on Sunday, the New York Daily News reports.

According to Cieszkowski, when he exited his car to go to the meter, Baldwin called him an “a**hole” and shoved him in the chest before hitting him “in the left jaw with his right hand.” Baldwin was arrested for attempted assault and harassment and, in January, the actor pled guilty to harassment and had to do a one-day anger management course and pay a $127 fine.

The assault charge was dropped, however, and Baldwin’s legal team said they had video that showed he did not hit him in the face.

Cieszkowski is now seeking damages for physical and emotional distress, claiming he experienced pain, headaches, and lost sleep following the incident. He allegedly stopped running for a few weeks, struggled at work, and lost 10 pounds.

Baldwin appeared on SNL as Trump again on Saturday, and portrayed the president reacting to the results of the Mueller investigation.