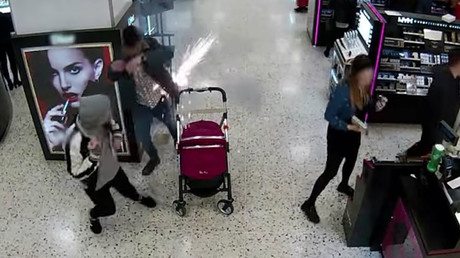 Fire services have released CCTV footage of the dramatic moment an e-cigarette battery exploded in a user’s pocket, just inches from a baby’s pram.

The video was captured inside the Trinity shopping center in Leeds in September. It shows the man unaware of the plume of smoke coming from his pocket until it begins fizzing violently and eventually explodes.

Shoppers can be seen scampering for safety. The owner of the e-cigarette was left with minor injuries and required first aid treatment.

West Yorkshire Fire and Rescue Service said the explosion occurred when a spare lithium-ion battery in the man’s pocket came into contact with another metal item, such as coins or keys.

Fire chiefs released the video as a warning to others with e-cigarettes.

“This is not the first time we have seen injuries caused by a lithium-ion battery exploding whilst being carried in someone’s pocket,” fire investigator Jamie Lister said.

“We really want the public to understand the risks which can be easily avoided.

“There does not have to be a fault with the battery, the problem is the incorrect storage of the batteries.”

A similar incident occurred last month when a nightclub owner in France suffered second degree burns after his e-cigarette exploded in his pocket.