Democratic Unionist leader Arlene Foster has vowed to block any attempt to create a border in the Irish sea between Northern Ireland and the British mainland during Brexit negotiations.

“Northern Ireland is British and British it will remain,” Foster told the DUP faithful gathered for the party’s annual conference in Belfast. Foster, dubbed the kingmaker, after her party secured a £1 billion deal for the province from Theresa May’s government following the snap UK election in June, also told followers that Britain would quit the EU as “as one United Kingdom.”

The deal saw the DUP prop up the Tory government, following damaging losses in the surprising election. Foster’s comments come as the issue regarding Northern Ireland’s border threatens to become a key point in Brexit negotiations.

The government of the Republic of Ireland previously vowed to stop talks moving onto trade, if there  are any suggestions of reinstating a so-called “hard border” separating the Republic from its neighbor to the north. The island has been politically split in two since 1922, following the Irish war for independence, which resulted in the creation of the then Irish Free State (now the Republic) and Northern Ireland. 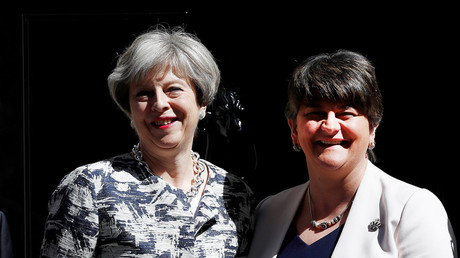 Both Dublin and the European Union have backed suggestions that a customs border be established on the British mainland and not the island of Ireland, though Foster has categorically ruled out such a proposal, saying that it would damage the north’s position within the union.

“We want a sensible Brexit. A Brexit that works for Northern Ireland and for the United Kingdom,” Foster said:

Foster further stated that she had written to the “heads of government of each of the EU 27 member states setting out our views.”

2017 has been a memorable year for the once-embattled DUP leader who faced intense calls to resign earlier in the year to standing on the steps of Number 10, the fate of the Tories in her hand.