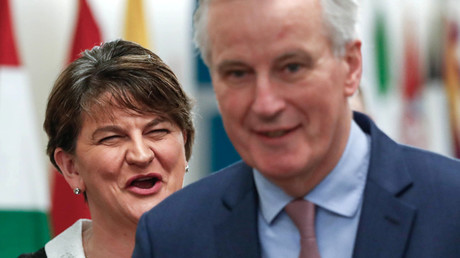 Theresa May got a stark warning about the power of her Northern Irish allies, the DUP, after they switched their support, siding with Labour in several parliamentary votes on a finance bill.

The move throws into doubt the future of the confidence and supply arrangement that sees the DUP’s 10 MPs vote with the government. In return for their support, May pledged that there will be no separate post-Brexit status for Northern Ireland.

The Tory-DUP deal is now under threat, after the Northern Irish party warned that the Brexit withdrawal agreement threatens the unity of the United Kingdom, following its publication last week.

Sammy Wilson, the DUP’s Brexit spokesperson, told the BBC that the deal means that “the government has not honored its side of the bargain, [and] we tonight tried to spell out some of the consequences of that.”

On Monday, the DUP displayed their power by failing to back May’s minority government in several votes on a finance bill.

“We had to do something to show our displeasure,” Wilson said.

The tactic, which saw the DUP siding with Labour, was “designed to send a political message to the government: Look, we’ve got an agreement with you but you’ve got to keep your side of the bargain otherwise we don’t feel obliged to keep ours,” stated Wilson.

The DUP’s Nigel Dodds, who once said a Corbyn government would be a national “disaster,” praised the Labour leader last week, saying that he “gets it” in relation to the withdrawal agreement. The cozying up of Dodds to Corbyn is an ominous sign for May, relying as she does on the DUP’s support to pass legislation.

May’s much-maligned Brexit withdrawal deal wouldn’t get through parliament should her DUP allies join with Labour, among others, in voting against it.

While none of the opposition motions passed, the shadow minister for the Cabinet Office, Jon Trickett, said that the vote signaled that “we no longer have a functioning government. With Brexit only a few months away, something has got to give.”

The DUP’s warning will dampen May’s confidence, which was growing after an attempted coup by the hard-Brexit-supporting faction, the European Research Group (ERG), began to stutter.