Shocking CCTV footage shows a drunken thug violently throttling and punching a grandmother in a pub garden after she confronts him for being disruptive.

The attack over the Easter weekend on Gill Matthews, 54, who runs The Waggon and Horses in Stoke-on-Trent, Staffordshire, left her with bruising to her nose, neck, back and left leg after being shoved and punched.

Another woman, who was present at the time of the attack, was also caught on the face by the assailant’s left hook.

“It was so frightening. It all happened so quickly and I didn’t really have time to think about it,” Matthews, who has managed the pub for a year, told the Daily Mail.

“I had my hands in my pockets and I was just doing my job as a landlady, asking why he was mouthing off in my pub. It’s bad enough to hit a woman, but this is the sort of threat we all face working in licensed premises. I’ve had enough of it – I won’t stay silent anymore. 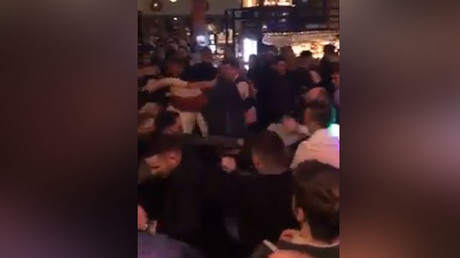 “It was fairly quiet for a Bank Holiday Sunday, same as it was last year, and my staff said this bloke had been coming in effing and jeffing [swearing] so I went out to see him.

“As I walked over he sprung up and started shouting at me quite aggressively. Out of nowhere he just put both hands around my neck and pushed me to the floor. He grabbed me again and throttled me, then a few moments later he punched me.

“He managed to hit the other woman too with his follow-through. He’s a nasty fella. He’s taken umbrage with me for trying to keep my pub in order.”

After the initial confrontation, caught on the pub’s CCTV, the attacker chased Gill back into the building, where she quickly called police.

A spokesperson for Staffordshire Police said its investigation into the incident is ongoing.