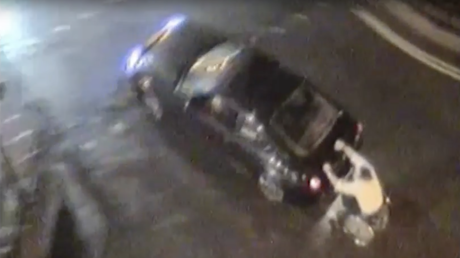 A 20-year-old motorist has been charged with dangerous driving after he was caught on CCTV pulling a man along a road in Harrowgate in a wheelchair.

The footage, released by North Yorkshire Police on Friday, shows Michael Ward dragging 28-year-old William MacPherson along the road until they come to a stop outside a McDonald’s restaurant.

When MacPherson lets go of the car, Ward stops and reverses so that they can keep racing around. They then continue to joyride and stop on two other occasions.

The pair were spotted chatting outside a nightclub, the Moko Lounge, in the early hours of the morning before Ward drove off with MacPherson holding onto the back bumper.

Ward, of Harrowgate, admitted to dangerous driving when he appeared in court last month, police say. He was disqualified from driving for 20 months, ordered to complete 200 hours of unpaid work and fined £85 (US$110) plus an extra £85 in costs.

MacPherson, also of Harrowgate, at the same hearing admitted holding onto a vehicle for the purpose of being drawn. He was fined £154 and ordered to pay £60 in costs.

Traffic Constable Rob Roberts, of Harrogate’s Road Policing Team, said Ward and MacPherson had “acted selfishly” and “paid no regard to the safety of other road users or pedestrians.”

“I hope the sentence that has been handed to them teaches a lesson to both of them, and others, that reckless behavior will not be tolerated on our roads,” he added.