Originally appeared on The American Conservative.

Jack Goldsmith and Oona Hathaway review the preposterous legal “arguments” in support of yesterday’s illegal attack. Here they address the erroneous claim that the attack was justified under international law because it was a response to the use of banned chemical weapons:

Nowhere does the [Chemical Weapons] Convention provide for unilateral uses of force in response to a breach of the Convention. And if it had, there’s a good chance no state would ever have joined it. And putting the treaty to one side, there is no reason at all to think that any related “norm” prohibiting the use of chemical weapons can be enforced with force outside the Charter framework [bold mine-DL].

Put simply, member states can’t ignore the U.N. Charter’s prohibition against using force against other states in the name of enforcing other international norms. Syria’s violations of its international obligations do not give other states license to disregard their own by launching military attacks against them. The U.S. and its allies don’t have any legal support for what they have done, and they make a mockery of their professed concern for international order when they wantonly undermine one of the core protections of the UN Charter.

This typical liberal interventionist reaction shows that supporters of the attack don’t really care about international law at all: 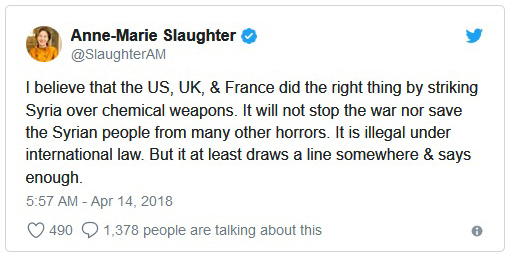 In other words, the attack is effectively useless and illegal, but so long as it conveys our displeasure with the Syrian government Slaughter thinks it is worth doing. One could scarcely ask for a more ridiculous defense of committing acts of war against another state than this, but this is what interventionists are reduced to because they care more about finding excuses for military action against certain governments than they care about international law.

“Humanitarian” interventionists have previously tried to defend obviously illegal military action by claiming that it is “illegal but legitimate.” Of course, this is the rhetoric of vigilantism, and international vigilantism is indistinguishable from aggression. This is how many liberal internationalists tried to reconcile their nominal support for the UN Charter with their support for the Kosovo war. Goldsmith and Hathaway think through the implications of what this would mean if it were widely accepted as a standard for the use of force:

When all is said and done, there are no valid legal arguments that support what the US and its allies just did in Syria.

Daniel Larison is a senior editor at The American Conservative, where he also keeps a solo