USA Today (11/27/18) warns Democrats that efforts to address climate change might “whisk them out of power” again.

“Democrats Will Push on Climate Change,” declared the lead story on the front page of the November 27 USA Today. (The online version bore the more verbose headline, “Once Democrats Take Charge of the House, Addressing Climate Change Will Become Top Priority Again.”)

You might think the story was about the Green New Deal, the nascent environmental and social justice agenda that would include a special congressional committee on climate change, championed by incoming Rep. Alexandria Ocasio-Cortez and endorsed by at least a dozen co-sponsors.

The real point of the 925-word story, by Gannett Washington reporter Ledyard King, was conveyed in the print edition’s subhead: “Policies Could Carry Risk for Leaders of New House.”

Featuring a classic “balance as bias” reporting frame, the piece alternated between dire, scientifically validated descriptions of climate change risks and President Trump’s dismissal of them, and between illustrations of Democratic clout and predictions of the futility of their cause.

KOed by Cap and Trade?

King led with a warning that set the tone for the rest of the article:

Capitol Hill Democrats who soon will run the House of Representatives are prioritizing climate change nearly a decade after their attempts to slow global warming helped whisk them out of power.

By “attempts to slow global warming,” King is referring mainly to the American Clean Energy and Security Act of 2009, the bipartisan carbon cap-and-trade bill known as Waxman/Markey. The legislation, which would have set a national limit on greenhouse gases and created a market to buy and sell emissions permits, passed the House in June 2009, but was not taken up by the Senate. It has lain dormant since Republicans took the House in 2010.

But then the piece veered from this empowerment narrative to sow doubts about the political wisdom of addressing climate change—rejoining Dems’ plans with Trumpisms and unattributed (and unchallenged) Republican talking points, a pattern it repeated throughout. King returned to his lead’s unsubstantiated assertion that fighting climate change was why Democrats lost power eight years ago:

The quandary for the party leaders when they take back power January 3 is how aggressively to pursue an issue that contributed to the Tea Party wave that fueled the Republican takeover of the House in 2010.

How prepared are they to address opponents’ arguments that “alarmist” climate change policies would increase energy prices and reduce consumer choice? How willing are they to take on a president who was elected….on…[a] platform that promised to “bring back coal” as part of an energy independence agenda?

Not so much, he concluded. The Dems are mostly

content to build a case through…the power to subpoena administration records, knowing that any major legislation they could pass probably would be vetoed by the president.

King “balanced” the broad evidence that climate change effects “are already being felt through stronger hurricanes, more intense wildfires, melting glaciers and loss of habitat” with Trump’s absurd labeling of global warming as “a hoax perpetrated by China” and his easily refutable quote that the 2017 Paris Accord “is less about the climate and more about other countries gaining a financial advantage over the United States.”

The story zigged to quote a climate-change expert explaining the significant power Congress will wield to “force records into the light of day [and] pressure the EPA to withdraw rules or Congress to pass laws” if those records show the agency was unduly influenced by the fossil fuel industry. It then zagged to the ultimate failure of Waxman/Markey, which was “portrayed by opponents as little more than an energy tax that would hit consumers’ wallets.” For a third time, it raised the specter that that bill and other efforts to address climate change “helped fuel the Tea Party wave that propelled Republicans to take control of the House in 2010.”

The piece wrapped up by concluding that “though the effects and predicted consequences [of climate change] have grown more dire…some House Democrats are content with modest efforts to address global warming.” King concluded, “Even if the House did pass an aggressive plan, it’s doubtful the GOP-controlled Senate would take it up.” The not-so-subtext: History, or USA Today‘s version of it, is bound to repeat itself.

USA Today’s piece distorted important facts and lacked historical context. First and foremost was the insistence that the 111th Congress’ efforts to forge climate policy had an important role in the rise of the Tea Party and Republicans’ victory in the 2010 midterm elections.

The case for climate change having a direct impact on the 2010 election is weak. Most obviously, the Democrats suffered losses because the electorate was older, whiter and less Democratic compared with 2008. When asked what the most important issue facing the country was, 63 percent of voters said it was the economy—understandably, since unemployment was still at 9.8 percent in November 2010 as the effects of the economic crisis lingered on. Eighteen percent more named healthcare as the top issue (with voters split on whether to repeal Obamacare or not); 8 percent picked immigration and 7 percent the Afghan War, accounting for 96 percent of voters.

Ruy Teixeira and John Halpin pointed out in the New Republic (11/5/10) that voters blamed Wall Street (35 percent) for the state of the economy more often than they blamed President Obama (23 percent) or his predecessor, George W. Bush (29 percent). “But these Wall Street–blaming voters supported Republicans by 56–42 percent,” Teixeira and Halpin noted—suggesting that Obama’s Wall Street bailout (and failure to prosecute bankers) drove independents to vote for Republican candidates. 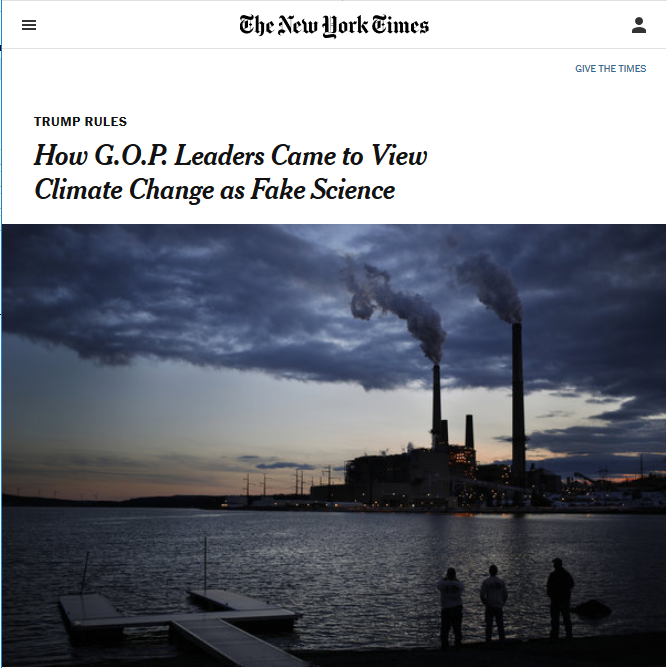 The Koch network, the Times reported,

While it’s not the case, as the Washington Post (12/2/18) recently claimed, that Donald Trump was responsible for “placing climate change skepticism squarely in the GOP’s ideological mainstream”—the George W. Bush administration had a systematic policy of suppressing scientific research that showed humans were warming the planet—it is true that not so long ago, it was possible for a mainstream Republican politician to talk about addressing  global warming, as evidenced by 2008 presidential candidate Sen. John McCain, among others. As the Times noted, the Waxman/Markey cap-and-trade bill, far from a radical proposal from the left, was modeled on a market-based, Reagan Era Republican idea. Cap-and-trade was employed successfully to cut smokestack emissions that cause acid rain under the first President Bush.

King writes of the “Tea Party wave” without mentioning the fossil fuel money behind it. But treating that spending against climate action as the definitive cause of the Democrats’ defeat is dubious, given that, as Time’s Bryan Walsh (11/3/10) noted, “Democrats who voted against cap-and-trade were three times more likely to lose then those who voted for it”—and seven of the eight Republicans who voted for it were re-elected. (The other, Mike Castle of Delaware, retired to make an unsuccessful bid to run for Senate—and was replaced in the House by a Democrat.)

In any case, climate change legislation proposed today—like the bipartisan carbon tax bill introduced November 27—is less likely to meet the same fate, because the political climate has changed. Some 70 percent of American voters believe climate change is real, 61 percent say they are worried about it, and 68 percent favor a carbon tax on fossil fuel companies, according to data from the Yale Program on Climate Change Communication’s 2018 Climate Opinion Map.

How could King have answered his own rhetorical questions?

How prepared are they to address opponents’ arguments that “alarmist” climate change policies would increase energy prices and reduce consumer choice? How willing are they to take on a president who…promised to “bring back coal” as part of an energy independence agenda?

He could have offset the argument that effective climate change policies are “alarmist” (made by Rep. Tom DeLay in King’s own November 27 story on the National Climate Assessment) with the fact that said Climate Assessment was written by scientists working in Trump’s own government. Or countered the charge that cap-and-trade schemes will increase energy prices by citing the Congressional Budget Office’s economic analysis of Waxman/Markey, which found it would likely have minimal impact on individual household tax bills, and that a refundable energy tax credit would help blunt any rise in energy costs.

The notion of “bringing back coal” is quixotic: As The Economist (11/24/18) recently pointed out, “The environmental regulations that the Trump administration is trying to undo will not restore the coal industry to its glory days, though they might slow its decline.” Citing US Energy Administration data, the magazine noted that almost 40 percent of the country’s coal-generating capacity “has either been shut down or designated for closure,” due to the lower cost of replacements such as natural gas.

As for energy independence, crude oil production has exceeded imports since 2016. And with the rise of fracking, the US is on pace to be a net exporter of energy by 2022, according to the US Energy Department.

Despite the potential shown by proponents of a Green New Deal, the argument that Democrats as a whole “prioritize” climate action is dubious. In USA Today’s own article (11/6/18) on Democrats’ retaking the House, soon-to-be Speaker Nancy Pelosi “said the new Democratic majority would take ‘strong legislative action’ to lower the price of prescription drugs, invest in infrastructure and ‘drain the swamp of dark interest money.’” There’s no mention of climate change.

Just as the environment was at best a minor factor in the Democrats’ loss in 2010, it didn’t drive most Democratic voters to the polls for their victory this year. As USA Today reported:

According to a Washington Post/Schar School survey…in battleground districts across the country…44 percent of voters said healthcare was the most important factor in casting their ballot, while 43 percent said Trump was the top issue driving their decision.

Curiously, King had penned a very similar piece earlier in the month that was more in line with reality. “Back in Power, Democrats Want Answers on Administration’s Environmental Decisions” (USA Today, 11/8/18) led off:

The midterm elections that catapulted Democrats back to power in the House for the first time in eight years have breathed new life into environmental priorities that President Donald Trump has been trying to roll back as the centerpiece of his economic agenda.

It explained how they hope to accomplish these priorities, quoting party leaders directly. “We’ve been ignored up to this point, but as the majority, we don’t need to tolerate that,” said Arizona’s Rep. Raul Grijalva, incoming chair of the House Natural Resources Committee.

King’s November 26 piece seems to backpedal on his earlier one. By continually harping on the challenges the Democratic climate hawks face, based on a questionable, unsubstantiated analysis of the political risks, USA Today’s article seems designed to push back on a  Democratic push to do anything at all about the climate catastrophe.