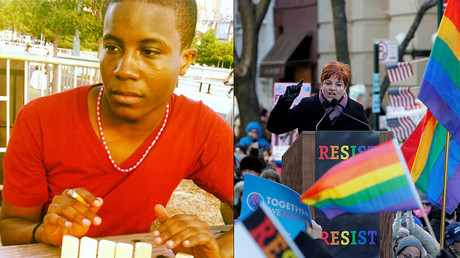 In a bizarre twist, the man who spray painted anti-Semitic graffiti on a Brooklyn synagogue turned out to be “queer,” black, former anti-hate-crime intern, James Polite: a 26-year-old with loving Jewish foster parents.

Less than a week after a gunman murdered 11 worshippers at a Pittsburgh synagogue, anti-Semitic graffiti was found scrawled inside Union Temple in Brooklyn’s predominantly Jewish Prospect Heights neighborhood. The graffiti read “Die Jew Rats” and “Hitler.”

NYPD arrests James Polite — the man they say is in this surveillance picture – in connection with anti Semitic graffiti found inside Union Temple in Prospect Heights. He’s believed to have also set fires outside schuls & yeshivas in Williamsburg @CBSNewYorkpic.twitter.com/WMm4UznAvf

A Democratic political event scheduled at the synagogue on Thursday night was canceled, and police investigated the incident as a hate crime. After being caught on the synagogue’s CCTV cameras, James Polite was arrested on Friday.

Far from being an archetypal tattooed skinhead, Polite is a black former Democratic intern who had his college education bankrolled by the New York Times’ ‘Neediest Cases Fund.’

Polite had a rough upbringing, according to a 2017 New York Times profile. He told the Times he identifies as “queer” and felt misunderstood at home. As a young teenager, he requested that he be placed in foster care, and spent the following years shunted from home to home.

In summary that old @nytimes puff piece Ryan dug up on James Polite does appear to be the same person. Instead of the success story from those pages his life has turned a dark direction. Photos of him with his adoptive mother show up on both his Facebook and NYTimes article. pic.twitter.com/3qqyTaT9gI

Polite met then-New York City Council speaker Christine Quinn at a gay pride rally in 2008, and landed himself an internship with the Democratic councilwoman. Under Quinn’s tutelage, Polite worked on anti-hate-crime initiatives and lent a hand to her unsuccessful bid for mayor in 2013. In return, Quinn, who referred to Polite as “the adopted child of the Quinn administration” wrote him a glowing recommendation to Brandeis University.

At the same time, an array of do-gooders chipped in and gave Polite a helping hand. Josh Waletzky and Jenny Levison, a Brooklyn Jewish couple on a mission to foster an “LGBTQ youth” took Polite into their home, and charity group Children’s Aid facilitated the placement. When Polite began his studies at Brandeis, the Neediest Cases Fund helped him financially.

Polite struggled in college, and smoked marijuana to cope with stress. After a leave of absence in 2015, he was diagnosed with bipolar disorder, but managed to resume his studies after some time away.

Before last week’s vandalism, the man appears to have been unstable. He railed against Jews in a series of Facebook posts, tagging his adopted parents. Polite posted a grainy cell-phone picture of himself burning an American flag, and wrote that a new “civil war is here.”

“Nobody gotta die. Mexico, latin America, carribean (sic) vs. Jew n*gger pigs. One person touch me this whole shit a smoking,” he wrote.

In the comments, friends urged Polite to seek professional help, and his one-time mentor Quinn wrote after his arrest that she was “simply and utterly devastated.”

“I knew this young man,” she wrote. “And while he has experienced hardship that most people can’t ever imagine, his actions are inexcusable.”

While Polite’s life seems to have gone down a dark path, from New York Times poster boy to synagogue vandal, he is not the first unlikely suspect to be busted for hate crimes in recent years. Last year, Israeli police arrested a 19-year-old Israeli Jew in connection with hundreds of bomb threats made to Jewish community centers across America.