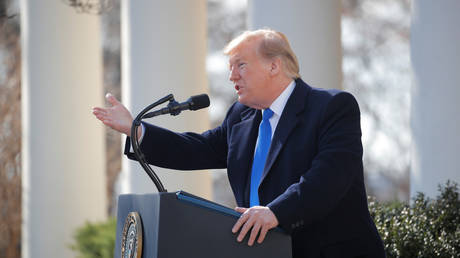 US President Donald Trump has praised China’s use of the death penalty for drug smugglers and even appeared to suggest that capital punishment might be a good way to “end the drug problem” in the US.

During a speech on border security at the White House on Friday, Trump said that “tremendous amounts of fentanyl” were being smuggled into the United States, much of which is produced in China.

Trump told reporters that during a meeting on trade, he asked Chinese President Xi Jinping to “declare it [fentanyl] a lethal drug and put it on your criminal list.” China’s laws are “much tougher” than US laws, Trump explained, while saying that “70,000 Americans were killed by drugs including meth and heroin, cocaine [and] fentanyl.”

Trump said Xi told him there was no such drug issue in China because “we give death penalty to people that sell drugs, end of problem.”

The president asserted that Xi agreed to put fentanyl on China’s list of deadly drugs and give it a criminal penalty, meaning the death sentence. Trump said the decision was one of the things he was “most excited” about in a trade deal that is currently being negotiated.

Twitter quickly freaked out at what many took for Trump suggesting that the US should be more like China.

Others were bemused by how a press conference to declare a national emergency on the border had veered into anecdotes from Trump’s conversations with Xi about the death penalty…and many also noticed how he appeared to impersonate the Chinese leader with a mild accent of a non-native English speaker.

In news conference to declare a national emergency, Trump somehow is … now offering praise for China for having the death penalty for drug dealers.

Ironically, it was only months ago that Trump received rare praise from both parties and the media for signing the First Step Act which actually reduces prison sentences for drug dealers – a fact which was not lost on Twitter, either.

“They signed it. Nobody cares. I guess they were less exciting.”
Hard to say whether that’s a point of pride or grievance.

President Trump is praising the death penalty for drug dealers. Less than 2 months ago, he signed the First Step Act which reduced prison sentences for drug dealers and others

Trump essentially attacking the #FirstStepAct in the Rose Garden — praises China for giving drug dealers the death penalty, attacking “blue ribbon committees” that meet to “waste a lot of time” on drug dealers.

It’s not the first time Trump has suggested tougher laws for drug dealers. In December, he referenced his conversation with Xi on Twitter, saying that Xi’s promise to criminalize the sale of Fentanyl coming into the US could be a “game changer,” adding that if China cracked down on “distributors and pushers” with the death penalty, the results “will be incredible” for the US.