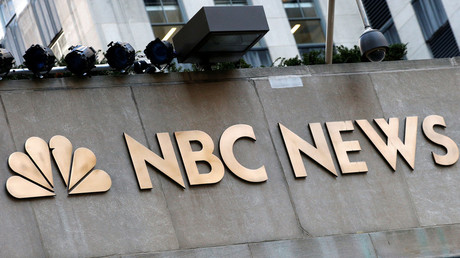 NBC News has been mocked online after the solemn announcement of the death of Sen. John McCain was followed by a bizarre video of two overweight men kissing in dolphin masks.

The news itself was like all the others presented by mainstream media – some clips of McCain speaking, some photos, and the details of how and when he had passed away. But when NBC switched to its regular scheduled programming –‘America’s Got Talent’– the scene was…well, it was something.

The screen went from a serious news anchor to a video of two shirtless men in dolphin masks, who were making sound effects as though the mammals were taking part in a ‘Dolphin Love Story.’ There was no transition, no fade to black before it began.

In the end, the two dolphins indeed fell in love, ending the so-called “performance” with a kiss and some rapid pumping of the sound effect gadget (use your imagination to determine what that means).

It should come as no surprise that the internet was quick to chime in on what they saw following the very solemn special report on McCain.

Some were purely baffled by what they had just seen.

What did I just watch? What the heck?

Others were embarrassed and concerned for America.

Boy if that doesn’t scream “America” I don’t know what does.

Boy if that doesn’t scream “America” I don’t know what does.

Some experienced a roller coaster of emotions throughout the entire debacle.

was crying, coverage ended, burst out laughing. So complex, such an apt metaphor for the times.

I laughed. Then I felt terrible. Then I laughed again. I think this cycle might go on for days.

Others met the situation with humor.

did they do this on porpoise?

Maybe someone can go back in time a million years and have the dinosaurs win this time.

And, of course, some Twitter users managed to say exactly what they were thinking with a meme.

The ‘Dolphin Love Story’ was performed by Yumbo Dump, a comedy duo from Japan. They reached the semi-finals on ‘Asia’s Got Talent’ in 2017.