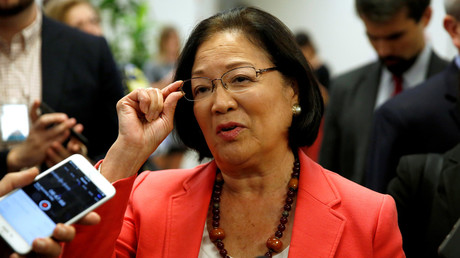 The Democrats managed to retake the House in November’s midterm elections but it didn’t quite amount to the impending ‘blue wave’ that was prophesied. One Democrat senator believes she knows the reason why.

Speaking to Canadian-American writer and journalist Dahlia Lithwick at a conference in Washington DC Tuesday, Senator Mazie Hirono (D-Hawaii) argued that Democrats were more adept at appealing to voters’ minds than their hearts when asked how Democrats could improve voter turnout.

Democratic Senator Mazie Hirono says Democrats have a hard time “connecting” with voters because of how “smart” they are and because they “know so much.”pic.twitter.com/S7Hwr2whnP

Hirono advocated for less manipulative language that stokes “fear and resentment” among disparate voters on both sides of the aisle.

“But we have a really hard time doing that and one of the reasons – it was told to me at one of our retreats – was that we Democrats know so much, that is true. And we have kind of have to tell everyone how smart we are and so we have a tendency to be very left brain,” she continued, in reference to the popular theory that left brain thinking is typically associated with linear, analytical thought.

It didn’t take long before the online outrage machine kicked into gear at the apparent lack of self-awareness displayed by the senator.

While others resorted to the more popular form of online expression, the GIF, to display their consternation at the remarks.

Others pointed to the 2016 presidential election result as evidence that the Democratic Party was vastly out of touch with the average citizen and may be doomed to repeat past mistakes.

And this is why trump got elected…people are fed up with this type of crap. The media and elitist left can’t understand why we want small govt, conservative values, low taxes and more freedom. So it must be because we’re not smart enough

Hirono is best-known as a leading and highly vocal opponent of the appointment of Judge Brett Kavanaugh to the Supreme Court, urging men to “shut up and step up.”

READ MORE: ‘Rules for thee, not for me’ Democrats pick & choose sex assault abusers to believe