The new Democratic House majority wasted no time targeting President Trump, with one congressman introducing a pair of bills aimed at abolishing the electoral college and preventing the president from pardoning himself.

Rep. Steve Cohen (D-Tennessee) introduced a pair of constitutional amendments; one aimed at outright abolishing the Electoral College, and one that would prevent presidents from pardoning “themselves, their families, their administration or campaign staff.”

On the first day if the new Congress, I introduced Constitutional amendments to limit a president’s pardon power & to eliminate the Electoral College. I also introduced a bill on medical marijuana. See my press releases here: https://t.co/QT5sHgWcPc & https://t.co/ISI5XYOGD0

Cohen is a senior member of the House Judiciary Committee and a vocal critic of President Donald Trump. He has previously introduced articles of impeachment against Trump together with  Rep. Al Green (D-Texas) and four other House Democrats, to no avail.

The bill to end the electoral college is a drastic one, and one aimed squarely at the current president. Trump lost the overall popular vote in 2016, but won the election due to what Cohen called the “distorting effect of the outdated Electoral College.” 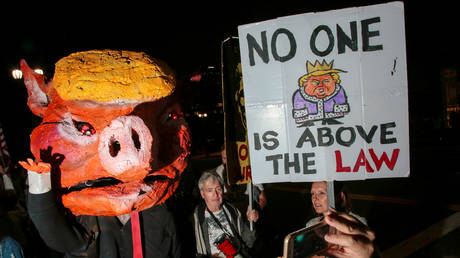 What Cohen calls “distorting,” others call “fair.” The Electoral College gives each state votes in proportion to the amount of representatives and senators the state has in Congress. Proponents of the Electoral College say it stops populous states like New York and California from exerting greater influence on elections than smaller states like Vermont and Wyoming.

Thanks to the Electoral College, two presidents have been elected despite losing the popular vote in recent times: Trump in 2016 and George W. Bush in 2000. Then, as now, Democrats and opponents of the college introduced bills and penned angry op-eds against the system. Indeed, there have been over 700 proposals introduced in Congress in the last 200 years to abolish or overhaul the system.

The proposal to curtail pardons is a less radical one, but is still a constitutional amendment – and of course, Trump would only ever need to pardon himself in the event he were actually impeached. While Michigan Rep. Rashida Tlaib also kicked her Congressional career off with a call to “impeach the motherf***er” on Thursday, impeachment is a drawn out process that would require a House majority, then a Senate supermajority, only after the upper house holds a trial and establishes whether “high crimes and misdemeanors” have actually taken place.

With talk of impeachment on the lips of the Democratic party’s more radical wing, House Speaker Nancy Pelosi (D-California) made a point of cooling things down on her first day back in power.

“If there’s to be grounds for impeachment of President Trump — and I’m not seeking those grounds — that would have to be so clearly bipartisan in terms of acceptance of it before I think we should go down any impeachment path,” she told USA Today.


Still, if the first day back in session is anything to go by, the 116th Congress is not going to make things easy for President Trump. Pelosi has vowed that her party will confront Trump on everything from his immigration policies to his tax returns and family businesses. Trump’s impasse with congressional Democrats over his proposed border wall between the US and Mexico.has already shut down parts of the US government for two weeks and counting.

“He was used to serving with a Republican Congress, House and Senate that was a rubber stamp to him. That won’t be the case,” Pelosi said.

Cohen’s latest efforts are likely to fail, given that both need two-thirds supermajorities in the House and Senate to pass, and must then be ratified by three fourths of all US states.