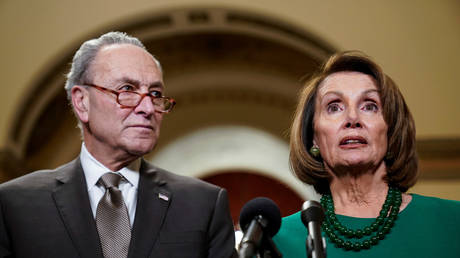 Democrats are up in arms over US President Donald Trump’s proposal to fund a border wall in exchange for protection for DACA recipients and TPS immigrants, denouncing it as a one-sided non-starter.

Democrats began shredding Trump’s compromise proposal even before he went public with his “major announcement.”

House Speaker Nancy Pelosi put out a lengthy statement, calling it “a non-starter” some five minutes before Trump was to address the nation. Pelosi, basing her statement on “initial reports” about Trump’s plan, said it represents “a compilation of several previously rejected initiatives, each of which is unacceptable.”

Senate Minority Leader Chuck Schumer echoed her stance shortly after Trump laid out the details of his plan to reopen the government, now almost a month in shutdown.


Trump said that he was offering a “common-sense compromise” by proposing three years of legislative relief for 750,000 DACA recipients, young adults who illegally arrived in the US as children, and a three-year extension of stay for 300,000 migrants with temporary protected status.

Apart from the $5.7bn wall, the proposal also included a host of measures to beef up border security and fend off drug traffickers, such as recruiting an additional 2,750 border agents and allocating $800mn in urgent humanitarian assistance, and $805mn to combat drug trafficking.

Under the plan, the government would also hire 750 more immigration judges to better cope with massive backlogs.

Helping DACA recipients is one of the main focal points for the Democratic Party’s pushback against Trump. But unlike in the Trump deal, they want wide-ranging amnesty for illegal child arrivals, rather than temporary relief. Blasting the proposal, Schumer said that Trump “keeps putting forward one-sided and ineffective remedies.”

“It was the President who single-handedly took away DACA and TPS protections in the first place – offering some protections back in exchange for the wall is not a compromise but more hostage taking,” he stated.

It was President @realDonaldTrump who single-handedly took away DACA and TPS protections in the first place—offering some protections back in exchange for the wall is not a compromise but more hostage taking.

While the harsh rebuke from the Democrats was rather predictable, there have been some dissenting voices among hardline conservatives, though congressional Republicans overwhelmingly sided with Trump.

Rep. Steve King (R-IA), who drew bipartisan condemnation over “racist” white supremacy comments on a radio show, appeared to oppose Trump’s proposal, tweeting “NO AMNESTY 4 a wall!” while calling a concrete border wall, a design that Trump no longer advocates, “a monument” to US sovereignty.

A Big Beautiful Concrete Border Wall will be a monument to the Rule of Law, the sovereignty of the USA, & @RealDonaldTrump. If DACA Amnesty is traded for $5.7 billion(1/5 of a wall), wouldn’t be enough illegals left in America to trade for the remaining 4/5. NO AMNESTY 4 a wall!

The proposal also did not strike a chord with prominent conservative commentator Ann Coulter, a fervent border wall advocate who the left-wing media is blaming for goading Trump into the government shutdown in the first place.

So this Trump proposal fails both the Pelosi and the Coulter tests, apparently.

Trump proposes amnesty. We voted for Trump and got Jeb!

The majority of Republicans sided with the president, including Sen. Lindsey Graham (R-SC), who floated a similar proposal himself, and Sen. Mitt Romney (R-UT). The latter, despite being at odds with Trump, called it a “reasonable, good faith proposal that will reopen the government and help secure the border.”

.@POTUS has put forth a reasonable, good faith proposal that will reopen the government and help secure the border. I look forward to voting for it and will work to encourage my Republican and Democratic colleagues to do the same.

Sen. Marco Rubio (R-FL) chastised the Democratic opposition to the proposal as “completely irrational obstructionism,” while Sen. Susan Collins (R-ME) called the compromise “a sign of strength” rather than weakness.

But Dem leaders reject it because includes some Border Security money.

This is completely irrational obstructionism

Sen. Cory Gardner (R-CO) was also on board, calling it a “reasonable proposal,” as was Sen. Lamar Alexander (R-TN), who described it as a “sensible compromise.”

Some 800,000 government employees have not seen paychecks or have been furloughed for almost a month now with the shutdown hitting its 29th day.