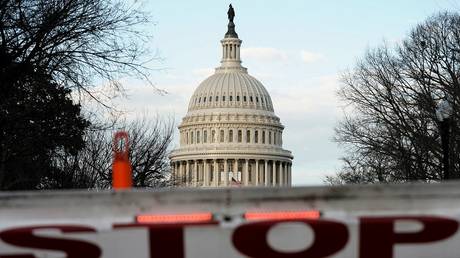 Once Democrats take over the House on January 3, they are planning to pass a government funding bill without any money for the border wall. President Donald Trump shows no sign of caving as shutdown continues, however.

As the impasse between Trump and the Democrats shut down parts of the federal government and forced some 800,000 workers to stay home or work without pay, the incoming Speaker of the House Nancy Pelosi (D-California) vowed the president would never get his wall.

Once Pelosi returns from her vacation in Hawaii and gets sworn in, she intends to have the House approve a bill that would fund the Department of Homeland Security until February and not include a penny for the border wall, the New York Times reported citing congressional staff.

While the Democrats have agreed on a proposal to end the partial government shutdown, there’s no guarantee it will soon end given the Senate is still firmly controlled by Republicans https://t.co/ejnMv4U496

Even if the Republican-majority Senate agrees to this – which the leadership has shown no sign of wanting to do – the question will come up again in just a few weeks. Democrats mean to use this to push for broader immigration reform and demonstrate they are the responsible party, according to the Times.

“We’ve got to really learn how to play jujitsu with the president and figure out how to take the wall issue and show the American people that we are the modern party who will actually secure the border and also be for a compassionate immigration system that recognizes the benefits of immigration and diversity,” Rep. Tim Ryan (D-Ohio), said in an interview Monday.

Unwilling or unable to pick one objection to Trump’s border wall proposal, they have panned it as “immoral, ineffective and expensive” as well as “fifth-century technology.”

Also on rt.com
‘Israel’s wall works 99.9%’: Trump says shutdown only about Democrats not letting him win


Trump, who campaigned on building a “big, beautiful wall” on the border with Mexico, showed no sign of backing down, however. While Democrats went on vacation, he stayed at the White House and tweeted up a storm, only taking a break for a surprise trip to Iraq and Germany to visit US troops overseas.

In one of the tweets on Monday, Trump reminded Democrats they have voted in favor of a border barrier twice before.

I’m in the Oval Office. Democrats, come back from vacation now and give us the votes necessary for Border Security, including the Wall. You voted yes in 2006 and 2013. One more yes, but with me in office, I’ll get it built, and Fast!

He also mocked the Democrats’ claim that walls are old technology, quipping “but so is the wheel.”

It’s incredible how Democrats can all use their ridiculous sound bite and say that a Wall doesn’t work. It does, and properly built, almost 100%! They say it’s old technology – but so is the wheel. They now say it is immoral- but it is far more immoral for people to be dying!

Trump and the Democrats have clashed over border funding before, resulting in a brief government shutdown in January 2018. At the time, Trump proposed a sweeping amnesty for children brought into the US illegally and their relatives in return for wall funding and immigration reforms. Democrats rejected it, however, and eventually prevailed in getting an omnibus spending bill that ignored immigration altogether, setting the stage for the December 2018 showdown.