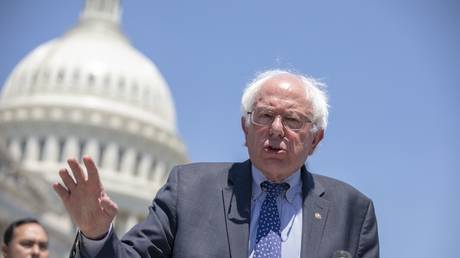 Vermont Senator Bernie Sanders has refused to recognize Juan Guaido as Venezuela’s ‘interim president,’ calling instead for new elections. His comments have enraged Democratic lawmakers who are pushing for regime change.

Sanders is widely seen as a top contender to take on Donald Trump in 2020, but his views on the current political crisis in Venezuela have put him at odds with the Democratic Party.

In an interview with Univision, the senator – an independent who identifies as a democratic socialist – was asked if he considers self-declared interim president Juan Guaido to be the legitimate leader of Venezuela.

“No. I think what has to happen right now – I think there are serious questions about the recent election. There are many people who feel it was a fraudulent election, and I think the United States has got to work with the international community to make sure that there is a free and fair election in Venezuela,” Sanders responded.

While he stressed the need for international cooperation in resolving the standoff between Guaido and Venezuelan President Nicolas Maduro, Sanders said that the United States “must not use military force and intervene again as it has done in the past in Latin America… whether it was Chile or Brazil or the Dominican Republic or Guatemala.”

The interview ruffled the feathers of Democratic lawmakers in Florida, who have adopted a hardline stance on Venezuela in order to appeal to the state’s politically active community of anti-Maduro Venezuelan-Americans.

“He is not going to be the nominee of the Democratic Party. He has demonstrated again that he does not understand this situation,” Rep. Donna Shalala, a Miami Democrat who represents Venezuelan exiles, told Politico.

The outlet also cited a statement released by the Florida Democratic Party, which said unequivocally that the group recognizes Juan Guaido as Venezuela’s legitimate leader.


Guaido declared himself “interim president” in January, a move that was quickly backed by Washington and a number of its Western allies.

In recent weeks, thousands of demonstrators have taken to the streets in Caracas – both for and against Maduro. However, the Venezuelan military has stood by the current government, leaving many to speculate that the US-backed usurpation attempt has already fizzled out.