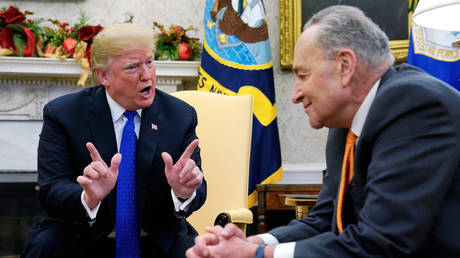 With President Donald Trump set to deliver a national televised address on the government shutdown and plans to build a border wall, Democrats want to “immediately” be given a chance to counter the president’s speech.

The government has been partially shut down for 18 days, and although negotiations have been ongoing, President Trump has thus far failed to reach a compromise with House and Senate Democratic leaders Nancy Pelosi and Chuck Schumer, both sides deadlocked over Trump’s requested $5 billion for a border wall between the US and Mexico.

After teasing that he might use emergency powers to build the wall, and suggesting that Pelosi and Schumer might be open to a less unsightly slatted steel barrier instead of a concrete wall, the president demonstrated his flair for a made-for-TV cliffhanger on Monday, announcing plans to address the nation “on the Humanitarian and National Security crisis on our Southern Border” on Tuesday night.

I am pleased to inform you that I will Address the Nation on the Humanitarian and National Security crisis on our Southern Border. Tuesday night at 9:00 P.M. Eastern.

Speculation went into overdrive. Would Trump use this address to declare a national emergency and build the wall? Would he trot out the victims of illegal immigrant crimes to tug the nation’s heartstrings? And, most pressingly, would the American people even get to see the address at all?

Commentators debated the ethics of televising a political speech from the president, with some arguing that doing so amounted to granting free airtime for his hardline immigration agenda.

“Donald Trump takes his immigration propaganda to prime time tomorrow. He’s asked for network time to address the nation about the govt shutdown…OF HIS OWN MAKING… a blatant effort to distract from stories he fears, the Mueller probe and his ties to Russia”- @NicolleDWallacepic.twitter.com/3bASEydcll

Airing Trumps Oval Office address is bad stewardship on the part of the major networks. It’s like a kid cryin “There’s a monster under the bed” and his parents coming in, opening the window and handing him a megaphone to shout to the whole block “THERE’S A MONSTER UNDER THE BED!”

However, the issue was never really up for debate. With Trump coverage dominating the airwaves since the 2016 election, the president’s offer was one the networks couldn’t refuse. CBS, MSNBC, ABC, Fox News, Fox Business and CNN all confirmed late Monday that they would air the address.

So the resistance, too, demanded to be televised.

“Now that the television networks have decided to air the President’s address, which if his past statements are any indication will be full of malice and misinformation, Democrats must immediately be given equal airtime,” Schumer and Pelosi said in a joint statement.

All the same major networks agreed to broadcast the Democrats’ response on Tuesday, but Fox and ABC had not confirmed at time of writing whether they will broadcast the response live. Schumer and Pelosi are slated to deliver their rebuttal in person.

Trump’s speech is set to air at 9pm Eastern Time on Tuesday, live from the Oval Office. With hours to go, social media speculation on what exactly the president and his Democratic opponents will say has intensified.

When Trump declares a national emergency at the border during his address tomorrow night, get ready for liberal heads to explode.

Remember watching Trump’s Oval Office speech that the president who use that setting the most was Richard Nixon — 43 Oval Office speeches — because Nixon hoped to bolster his credibility as he lied about Watergate. Trump’s employing a pure Nixonian tactic to lie about his wall!

Whatever its contents, Trump is scheduled to follow up his speech with a trip to the border town of McAllen, Texas. There, the president is scheduled to meet with officials working “on the frontlines of the national security and humanitarian crisis.”