Fifty senators signed the petition to reverse the repeal of net neutrality, including all 48 Democrats, one independent, and one Republican. The Federal Communications Commission (FCC) voted along party lines to get rid of the rule in December, arguing that internet service providers were not charging to prioritize content.

Advocates of the rule have argued that, absent federal regulations, the providers would create a multi-tiered “pay for play” system, prioritizing some content at the expense of others.

Parallel to the legislative push by the Senate Democrats, activist groups Demand Progress, Fight for the Future and Free Press Action Fund launched the Red Alert for Net Neutrality campaign. A number of internet platforms have joined the campaign, posting a banner on their sites.

Among those who have endorsed the initiative are World Wide Web inventor Tim Berners-Lee and Democratic FCC commissioner Jessica Rosenworcel. 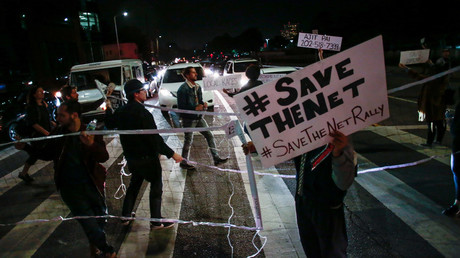 Democrats are invoking the Congressional Review Act (CRA) of 1996, which enables the legislature to override regulations within 60 days of them being enacted. The Trump administration has invoked the CRA over a dozen times over the past year to roll back regulations enacted by the Obama administration.

A petition by 30 senators can force a vote on the measure to be scheduled without having to wait for a committee decision. The measure would then need a simple majority in both the Senate and the House of Representatives.

“We don’t know how this is going to end, but this is part of an effort to get every member of Congress on the record either supporting or opposing net neutrality,” Senator Brian Schatz (D-Hawaii) told The Verge on Wednesday. “With this piece of legislation there is nowhere to hide and there are no excuses.” However, the bill could still be vetoed by President Donald Trump.

Parallel to Markey’s efforts in Congress, 22 states sued the FCC in January to reinstate net neutrality via the courts.

“Internet access is a utility – just like water and electricity,” California Attorney General Xavier Becerra said at the time. “And every consumer has a right to access online content without interference or manipulation by their internet service provider.”

The suit was spearheaded by New York AG Eric Schneiderman, who resigned on Monday after being accused of “non-consensual physical violence.”