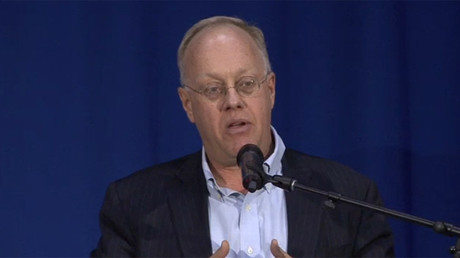 A rigged democratic system, a “grotesque” military fighting unwinnable wars under the “drone commander in chief”, and the future of the movement behind presidential candidate Bernie Sanders were the focus of Day One at the Left Forum in New York City.

Chris Hedges, Pulitzer Prize-winning journalist and author, addressed the nature of power in the 2016 presidential election.

“It is our job to make the powerful frightened of us,” he said. “That is what movements do. Movements keep power in check, and as any good anarchist will tell you, power is always the problem, no matter who holds it.”

According to Hedges, who doesn’t hold out hope for Sanders getting the Democratic Party nomination, said it was a mistake to run within that party and that both Sanders and his supporters are now dealing with the fact that the system is rigged.

“The cost of running the primaries is that paid for by the taxpayers,” Hedges said. “And yet, the primary rules are determined by the Democratic Party, so that they can manipulate a system as they did in Nevada, to steal the vote from Sanders.”

Citing the exclusion of independents in closed primaries and the dominance of superdelegates and super PACs, Hedges added: “It’s very clear that without all of these mechanisms, Sanders would win the nomination.”

He insisted there is “palpable evidence that democracy within the United States is a fraud,” and referred to Hillary Clinton and Donald Trump’s high unfavorability ratings to highlight the importance of creating movements outside the system of “the mantra of ‘the least worst.’”

As for outgoing President Barack Obama, Hedges said his attack on civil liberties has been worse than that by George W Bush, pointing to his use of the Espionage Act.

Medea Benjamin, the Code Pink activist known for infiltrating Congressional hearings and the Republican convention, started by disagreeing with Hedges’ opinion that Sanders should have run as an independent, describing the party as Clinton, Wall Street, and the weapons industry on one side and people who “really want the Democratic Party to represent their values and they are values that Bernie Sanders is standing for” on the other.

Benjamin took an impromptu straw poll of those in the room, asking who was voting for Hillary Clinton, the Green Party’s Jill Stein, libertarian Gary Johnson, or Republican Donald Trump.

Stein won by a huge majority, showing that the “lesser of two evils” argument may not force Sanders supporters to settle for Clinton.

Benjamin praised Obama, a frequent adversary, for his “successes” with the Iran nuclear deal and Cuba, adding, “Let’s not forget, they did not happen while Hillary Clinton was secretary of state.”

Her lovefest for the current president quickly ended when she referred to him as “the drone commander in chief,” reminding everyone of the way he spread “horrendous technology” and failed to reduce terrorism.

While giving props to Donald Trump’s NATO skepticism, she emphasized, “Let’s not be fooled by Trump,” noting that his campaign built on Islamophobia, anti-immigration and the fact that he is open to bringing back torture.

Benjamin ended on a positive by highlighting how the “localized economy” could replace the war economy, encouraging people to invest in credit unions, buy from local farmers, and choose thrift shops over sweatshops.

“This is the kind of economy we have to build,” she said.

Legendary activist Tariq Ali, the supposed inspiration of the Rolling Stones hit “Street Fightin’ Man”, brought an international perspective to the US election and said “we are on the verge of change,” referring to the mobilization of people around Sanders, which has brought people together “more than any other time in recent US history.”

He then brought the crowd across the pond to talk about Jeremy Corbyn’s remarkable uphill struggle within his own party and the establishment, citing the senior army general who told Rupert Murdoch’s Sunday Times that if Corbyn was elected Prime Minister, there would be “mutinies in the army and they would refuse to follow orders.”

An early session on Saturday takes us inside the cooperative revolution in Jackson, Mississippi, which currently faces pushback from the Republican governor and state legislature.