We are in the middle of enormous cultural changes within western society which have many observers bewildered and many participants bemused.

God in Public: How the Bible Speaks Truth to Power Today, by N. T. Wright

Wright offers his definitions of modernity and postmodernity.  The modern world, broadly speaking, is the Western world from the eighteenth century to the present:

The European Enlightenment at the intellectual level, and the Industrial Revolution at the social level…

This period gave us what Wright calls “the modernist trinity”: the confident individual (‘I am the master of my fate, I am the captain of my soul’); there is certainty of the world, knowledge is objective; a mythology of progress.

…we were no longer bound to traditional religions or ethics…religion and ethics were a matter of private opinion. …We have learned to think for ourselves…to free ourselves from the tyranny of tradition.

This is what is meant – implicitly and explicitly – when we consider the meaning of living in the modern world. 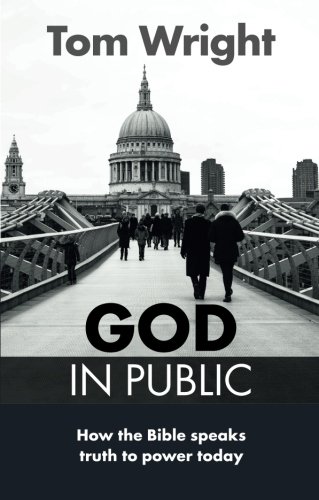 In such a framework, negative consequences are not difficult to predict.  For example, the broad sweep of ideas that fall under the framework of Social Darwinism: eugenics, selective breeding, racial purity.  Then again, who am I to say that these are “negative” consequences?  Without some broadly accepted ethical framework, such a statement is impossible.

Wright uses language with which I am not comfortable, for example, “industrial wage slavery.”  I will describe this phrase in a manner with which I can live.

Inflation (via central banking and fiat money) and taxes have ensured…