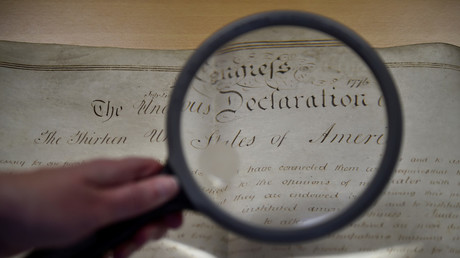 A Facebook algorithm designed to filter out hate speech did its job too well during this week’s Independence Day celebrations – after it removed excerpts of the US Declaration of Independence posted to the platform.

Texas local newspaper ‘Liberty County Vindicator’ fell foul of the algorithm when staff attempted to post sections from the founding document to its Facebook page Wednesday. Unfortunately, a line about “merciless Indian savages” found in the text did not meet the social media giant’s auto-censor and it was swiftly removed.

“Perhaps had Thomas Jefferson written it as ‘Native Americans at a challenging stage of cultural development’ that would have been better,” Casey Stinnett, the paper’s editor, wrote in a statement. “Unfortunately, Jefferson, like most British colonists of his day, did not hold an entirely friendly view of Native Americans.”

The line in question was written in reference to the English King George III. It reads: “He has excited domestic insurrections amongst us, and has endeavoured to bring on the inhabitants of our frontiers, the merciless Indian Savages, whose known rule of warfare, is an undistinguished destruction of all ages, sexes and conditions.”

Facebook later restored the offending post and apologized for the error, writing: “Sorry for the mistake. Happy 4th of July!”

Writing in a blogpost, assistant editor of ‘Reason’, a political magazine, Christian Britschgi, said the removal of the post showed the problem with automated searches for hate speech.

“Facebook’s actions here are silly. They demonstrate a problem with automated enforcement of hate speech policies, which is that a robot trained to spot politically incorrect language isn’t smart enough to detect when that language is part of a historically significant document,” the post read.