Monsanto has been using different tactics to suppress vital information for people who are being exposed to Roundup to decide if they want to use it or not, says Carey Gillam, investigative journalist and author.

The story with the agricultural giant’s Roundup weed killer began in the 1980s when tests on its primary ingredient, glyphosate, began to show cellular changes in laboratory animals that should have been considered early signals that the product could cause cancer. In 1995, the US Environmental Protection Agency (EPA) determined that this compound needed to be classified as a carcinogen.

However, six years later the EPA changed that classification and said it was wrong to designate it as a possible carcinogen, adding that the public had nothing to worry about.

Moreover, the laboratory data from the 1980s that the EPA used to classify glyphosate as carcinogenic suddenly became unavailable to the public, as Monsanto argued that all the early testing results for this chemical fell under the protection of the trade secret rule.

RT: Carey, you wrote a book called ‘Whitewash: The Story of a Weed Killer, Cancer, and the Corruption of Science.’ Monsanto apparently viciously worked to cover up the fact that their weed killer could cause cancer. After so many studies, what is your opinion on the fact that the company is doing everything they can to try to deny the truth?

Carey Gillam: The cancer question is definitely a big one with this chemical. It is the most widely-used agrochemical in the world. It is in our water, food, our own bodies… The International Agency for Research on Cancer (IARC) looked at decades of epidemiology and toxicology research and said this looks like a probable human carcinogen with strong ties to Non-Hodgkin lymphoma specifically. Monsanto says all of that research is wrong, this international agency is wrong and that this product is among the safest in the world, among the safest for people to use.

RT: In the 1980s we were told by the EPA that Roundup causes cancer, then in the 1990s they said it didn’t. And in between you have doctors and scientist after scientist saying that it does cause cancer. What is this back and forth all about? 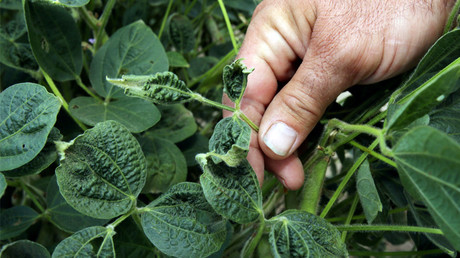 CG: Yes, our own EPA toxicologist back in the 1980s looked at a mice study that Monsanto had submitted to it. And these mice were showing these very rare and odd tumors – the mice that received glyphosate. Toxicologist for the EPA said at that time: “Wow, this looks like this stuff could cause cancer.” And they were very concerned about it, and they wanted to raid it that way. And Monsanto pushed back. This was in the 1980s – Monsanto pushed back very hard and ultimately convinced the EPA to discount what its own toxicologists were telling it, and to declare it to a safe product. This is what you’ve seen over the decades – in the 1980s, in the 1990s again and again. Scientists warn about the findings of glyphosate on laboratory animals. And epidemiology and human studies have exposure. People have been raising their arms trying to wave a red flag about this chemical for years in many countries, many scientists around the world. And every time Monsanto has said they are wrong. And sought to discredit the scientists, and to discredit the research that is sought to raise an alarm bell around this chemical. And they are still doing it. This has created a debate around the world – not only in the US, but in Europe and in many other countries – about how safe or not safe this really is.

RT: According to your book, firstly, there’s been a cover-up. Secondly, there’s been an attempt by  Monsanto to try to push back on science and create their own science to make it look like Roundup is perfectly safe. The third and very troubling thing is that seems like there is no help from the EPA in telling the truth. What’s your take on that? Is it right, or is it an overstatement?

CG: This has been the way that I’ve described this to people. I was asked to come to Europe and to speak to parliament about this. It is really decades of deception, and that is what it boils down to. It seems like a pretty strong thing to say, but it is decades of deceptive tactics by this giant chemical company to make billions of dollars – to deflect, to harass, to discredit, to suppress any information that would be useful to consumers and useful to these people, who are being exposed to this chemical to decide if they want to use it or not, to decide if they want their children playing in the yard that they sprayed with Roundup. People haven’t had that choice, because any information about risk has been hidden, while the company has been trumpeted and pumped out information about reward. In doing so they’ve employed multiple strategies; they have ghost-written certain scientific papers; they’ve tried out surrogates – both within the EPA and the universities around the country –  to try to control the public narrative and try to control what the public knows about this and what public doesn’t.