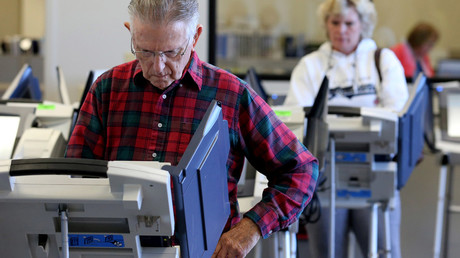 Voters in 35 states will not only be considering the next US president but 154 ballot measures as well. This year’s issues include loosening marijuana rules, healthcare reform, revoking the death penalty, increasing minimum wage, condoms, taxes and solar panels.

Of the 154 measures in 2016, 71 were put on the ballot by citizens. Only half the states allow citizens to collect signatures on petitions from voters for a ballot measure to be considered, and each state requires a different minimum number of signatures to be valid, from over 13,000 (South Dakota) to over 300,000 (California). The signature requirements are based on a percentage of votes cast in an election. The other way a ballot measure is included is through legislative referrals.

High on the ballot

So far, 25 states and the District of Columbia have passed legislation allowing marijuana for medical use.  Alaska, Colorado, Oregon and Washington have also decriminalized marijuana for recreational use, allowing products to be sold to people 21 and older.

In February, the Colorado Department of Revenue said government-licensed stores made nearly $1 billion in 2015, and the state’s gross revenue had increased 78 percent since the first year the drug was legalized, giving the state $135 million in taxes and fees.

While the state’s coffers were enriched, there has been a downside to legalizing the drug. In July the journal JAMA Pediatrics said rates of marijuana exposure in young children, many of them toddlers, had increased 150 percent since 2014 when recreational marijuana products, like sweets, went on the market legally.

When voters decided in 2012 to legalize marijuana for recreational use, researchers anticipated that rates of accidental exposure in children would rise.

“But we were not prepared for the dramatic increase,” said the senior author of the study, Dr. Genie E. Roosevelt, an associate professor of emergency medicine at the University of Colorado School of Medicine and Denver Health Medical Center told The New York Times.

The number of cases in the study, drawn from Colorado’s poison control data and from one children’s hospital, is modest. Between 2009 and 2015, there were 163 cases documented by the poison control center and 81 patients evaluated at one hospital for pediatric marijuana exposure.

Voters in 5 states will consider increasing or decreasing the minimum wage, which could affect 21.6 million residents.

The measures are a far cry from the nationwide demands for $15 minimum wage, but give the lowest-earning workers at least something, as Congress continues to take no action to raise the federal minimum wage of $7.25 per hour.

Voters in Colorado will decided under Amendment 69 whether the state will create ColoradoCare, a healthcare payment system designed to finance universal healthcare for residents partly through an additional 10 percent payroll tax – two thirds paid by employers and one third by employees. The plan would provide $25 billion per year in revenue, according to the Journal Denver Review.

Polls indicate low support for the measure, with just 28.5 percent of voters in favor, and 60.5 percent opposed. Critics of ColoradoCare have outraised supporters nearly five to one, with the ‘yes’ campaign with $891,558 and opponents with $4,067,563. The top donor to the ‘no’ campaign was the health insurance firm Anthem, Inc.

In California, a “yes” vote on Proposition 61 would further regulate drug prices by requiring state agencies to pay no more than what the US Department of Veterans Affairs pays for prescription drugs.

In early September 2016, the USC Dornsife-Los Angeles Times poll found 66 percent of respondents were supportive of Prop 61 and 23 percent were opposed.

California Democrats support Proposition 62 while the state’s Republicans are opposed. A mid-October poll by SurveyUSA found support for the initiative at around 35 percent and opposition around 53 percent, according to Ballotpedia.

Currently the death penalty is legal in the state but its use was put on hold in October of 2015, after several executions were conducted incorrectly. A review of the methods and protocols used during execution is ongoing. State Question 776 was designed, in part, to ensure that executions resume after the questions about protocol are settled.

As of January 1, 2016, there were 49 inmates on death row. Three executions, including the high-profile case of Richard Glossip, were scheduled in 2015 but were not carried out due to the court-ordered halt and procedural review.

Voters in Florida will vote on Amendment #1, concerning the rights for solar panels. The costs of installing solar panels are not cheap. In many states customers lease the panels through a third-party and sell excess electricity back to the utility grid.

The Sunshine state is one of five that doesn’t allow third-party ownership. It allows third-party leasing but not third-party Power Purchase Agreements (PPAs). Amendment #1 would allow solar leasing through the utility companies making solar affordable for many consumers but would not address third-party PPAs. And under the amendment utility companies would be compensated for their solar losses by adding new fees to solar consumers’ bills. Critics have argued that the amendment represents a “quick death” for the future of solar power in the Sunshine state.

Colorado will decide whether to override an exception to slavery prohibition for criminals, meaning that the state could not insist on convicts working for free.

Maine will decide whether to overhaul the state’s voting system.