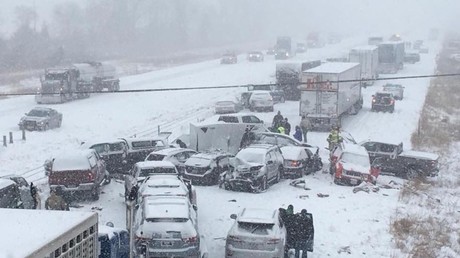 Iowa authorities have released footage of a massive 70-car pile up in which one person was killed.

The footage captured on a traffic camera was released by the Iowa Department of Transport. It shows motorists on Iowa’s Interstate 35 battle with rough, snowy driving conditions near Ames. It captures the multi-vehicle crash as it unfolds.

One person was killed and up to 10 injured in the crash. In total, seven people died in crashes across Iowa on Monday, Iowa State Patrol Sgt. Nathan Ludwig told KCCI.

What starts as a single crash barely visible through the snowstorm soon escalates, as cars, trucks and buses collide, despite their best efforts to avoid the growing pile-up.

Some vehicles manage to swerve to avoid the carnage, with some ending up in the surrounding fields. Motorists can be seen fleeing their vehicles to avoid being hit by oncoming vehicles.

Other drivers stuck in the pile up are seen standing outside their cars, trying to alert approaching vehicles. A section of the I-35 was closed following the incident.