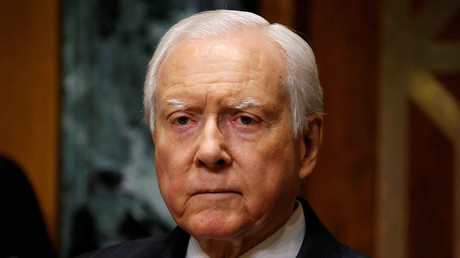 Senator Orrin Hatch (R-Utah) would like Google to know that reports of his death have been greatly exaggerated. The search engine showed that Hatch had died in 2017, apparently based on a bad Wikipedia edit left unchecked.

“Hi Google? We might need to talk,” Hatch’s office tweeted on Monday night, with a screenshot of the search listing the senator as having died on September 11 last year.

This was followed by a photo of Hatch reading a newspaper, as well as video of him signing some bills last week – overlaid by a Snapchat cartoon of Hatch enjoying some hot dogs that has to be seen to be believed.

But wait, there’s more! The office also posted a “proof of life” photo of Hatch preparing for an interview on Capitol Hill, “alive and well.” There were also photos and videos of Hatch meeting with German Chancellor Angela Merkel and US Supreme Court nominee Judge Brett Kavanaugh, visiting the WWII memorial, and celebrating his 84th birthday in March, with bacon.

“The reports of my demise have been greatly exaggerated,” Hatch said, paraphrasing Mark Twain, in a video posted on Tuesday.

A follow-up tweet by his staff revealed that the senator’s “demise” was caused by a Wikipedia edit. “But long after the Wikipedia page was fixed, Senator Hatch remained dead on his Google search so they kindly fixed it manually,” they added.

Pressured by the congressional witch-hunt for “fake news” in the wake of the 2016 US presidential election, Google has sought to fact-check information presented on the internet by using “authoritative” and “unbiased” sources such as Wikipedia. Solid in theory, the approach has been far less successful in practice, as Hatch’s case illustrates. Another infamous instance involved describing Republicans in California as “Nazis.”

Wikipedia has long been vulnerable to malicious editing, as just about anyone can make changes to the online encyclopedia.