Janine Jackson interviewed Debbie Weingarten about the already existing border wall for the January 11, 2019, episode of CounterSpin. This is a lightly edited transcript.

Janine Jackson: Only the easily surprised can be surprised that, gifted by the networks with a primetime platform with which to explain what emergency at the US/Mexico border necessitates the extended partial shutdown of the US government, Donald Trump delivered familiar hate-mongering and falsehoods, all in service of his notion of a “border wall,” which, it’s been recently reported, was intended as just a sort of mnemonic device advisers gave Trump as a candidate to remind him to “talk tough” on immigration.

Factchecking is fine as far as it goes, but were media to devote less attention to rhetoric and more to the reality of life as lived along the US southern border, any conversation about walls could at least be grounded in an understanding of the barriers that already exist, with significant impacts on the community and the environment.

Our next guest’s recent work reflects those concerns. Reporter Debbie Weingarten is a fellow for Talk Poverty and for the Center for Community Change. She joins us now by phone from Tucson, Arizona. Welcome to CounterSpin, Debbie Weingarten.

Debbie Weingarten: Thanks for having me. 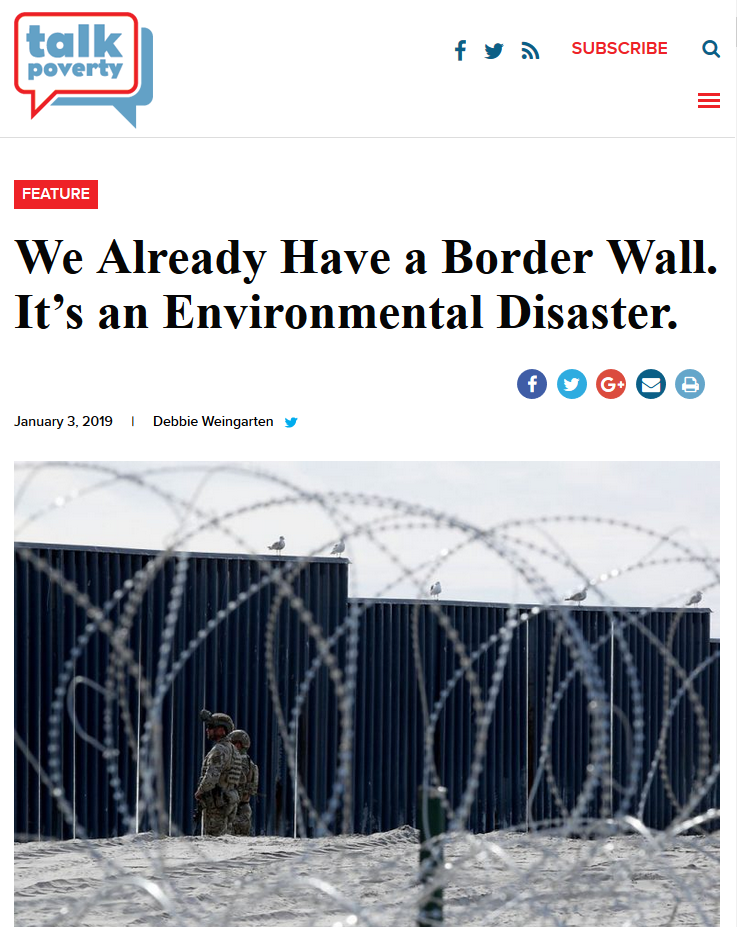 JJ: Whether it’s discussed as a dumb idea or a great idea, an expensive idea, the construction of a wall on the border of the US and Mexico is generally discussed as an idea. In your recent piece for Talk Poverty—I also saw it on Truth Out—you illustrate that the conversation really isn’t about building a wall, but building another wall, or more wall. Can you talk about the nature, physical and otherwise, of the already-existing barriers at the US/Mexico border?

DW: Right. The US/Mexico border spans about 2,000 miles, and of that, about 700 miles is covered in some sort of barriers. That looks different depending on where you are. In some areas, it’s more of a fence, and in other places, it’s an actual steel wall.

I’ll note that I live in Tucson, which is about 60 miles north of Nogales and the US/Mexico border. And Nogales used to essentially be one town that stretched across both sides of the border. But after Operation Gatekeeper began in the early ’90s, as part of the Clinton administration’s plan to curb undocumented immigration, there’s a huge rusty wall that went up, and literally just sliced the town in half.

So the wall is—to give you a sense of what it looks like—it’s made out of old rusty Vietnam War landing strip. It is in some places 30 feet tall. So it changed the landscape dramatically.

JJ: And there are walls, also, in the sense of there are cameras and there is monitoring and there are other things that we might not think of as a wall, but they certainly are effective barriers to movement.

DW: Absolutely, yeah, and that’s one thing that I think is missing in the national conversation: just how militarized our communities, our border communities, have become. Beyond just walls, we have drones and we have surveillance towers and Border Patrol checkpoints and underground sensors. It’s more than just a wall.

JJ: Well, I wanted to pick up on some of the history that you just were noting. You pointed out, in a piece back in the spring, that when Trump is threatening to send troops to the border, that that would not in fact be the first time that had happened.

Here, as elsewhere, Trump’s actions are brazen, and may represent an escalation, but they aren’t wholly original. And when it comes to border issues, we can point to a few key moments in policy that have shaped the situation that you’re describing now.

And one of those, as you just mentioned, was Operation Gatekeeper, and this idea of “prevention through deterrence.” I wonder if you could talk a little bit about the ongoing impacts of that policy. 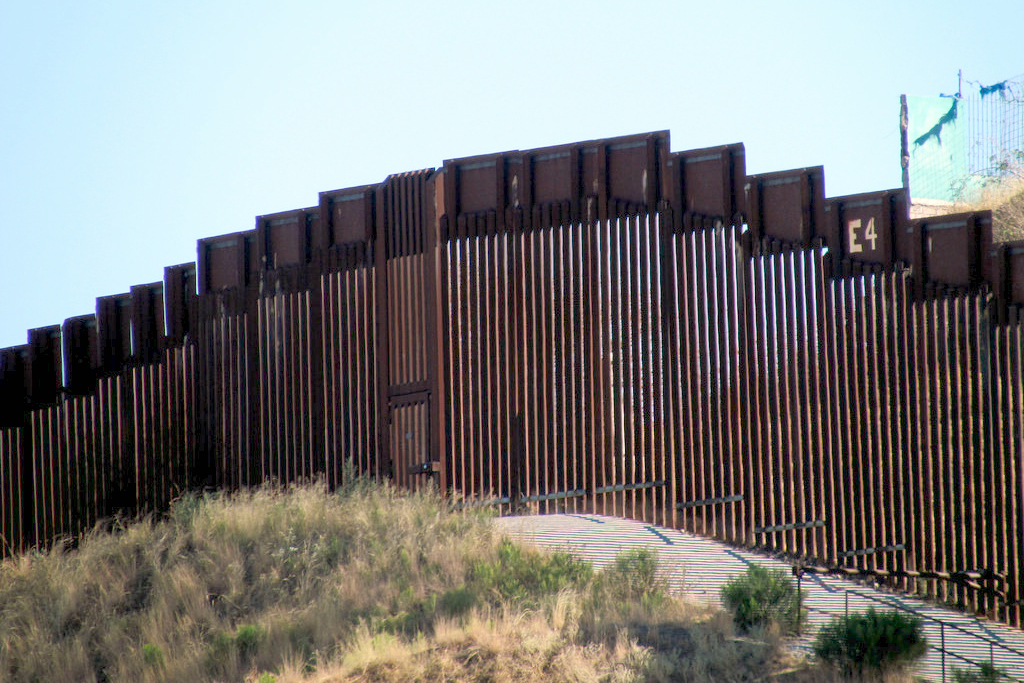 DW: The Operation Gatekeeper was, again, the Clinton administration’s attempt to curb undocumented immigration. That was essentially an attempt to seal urban areas along the border. And that accompanied a strategy by the Border Patrol, called “prevention through deterrence,” which, essentially, they were hoping that by sealing urban areas, that migrants would be deterred from crossing the border.

But what we know—in our lived daily lives, here on the borderlands—we know that that tactic just pushed border crossers further out into the desert. So—and again, hard to imagine, maybe, being someplace else—but this desert is beautiful, but it’s rugged and it’s inhospitable. In the summer, we have temperatures that can reach 120 degrees, and in the winter, it can dip below freezing at night. And we have summer monsoon storms. So it’s very, very rugged, and “prevention through deterrence” simply pushed people out into the desert, sometimes to their deaths. So at this point, over 7,000 bodies have been found in our desert, and thousands more are missing.

JJ: I’ve heard you and others even allude to the idea of “weaponizing the desert,” and that would seem to be what you’re evoking with that expression.

DW: Right. I think that the the people who live in the borderlands feel that not only are there weapons, literal weapons, being carried by troops and Border Patrol agents along our border and in our borderlands, but that the desert itself has been used against border crossers. So they’re counting on the cactus and the lack of water and the rocks that people twist their ankles on, and the wildlife, and rattlesnakes, to keep people out.

JJ: Since Operation Gatekeeper and this “prevention through deterrence,” we’ve also seen follow-up from subsequent administrations. Things like the Real ID Act in 2005, and the Secure Fence Act. And I know that in addition to the human impact, and of course it’s all related, but these have also had effects on the natural environment in border areas. 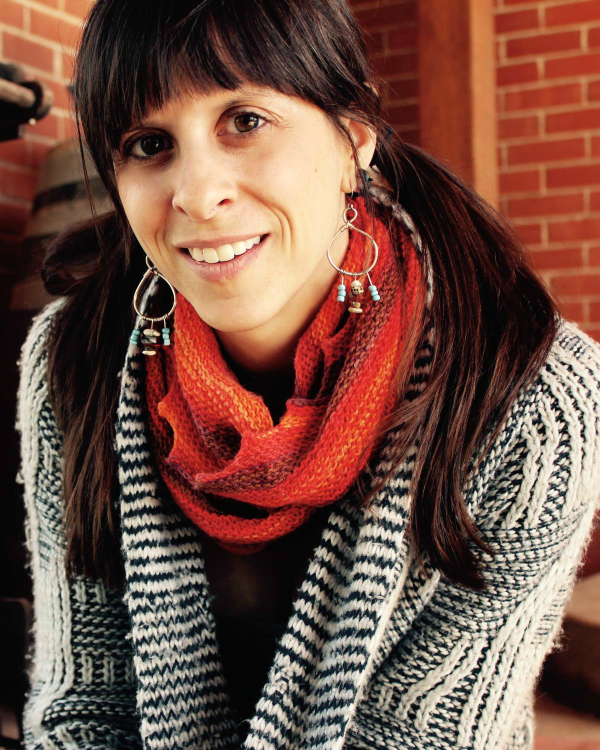 Debbie Weingarten: “The environmental community, the human rights community and the indigenous communities have really come together against border militarization.”

DW: Right. So one of the provisions in the Real ID Act of 2005 was that it included a provision that gives the Secretary of Homeland Security the power to waive any federal or state law that they felt was at odds with, and I’m going to quote here, “the expeditious construction of physical barriers and roads” along the US/Mexico border.

And then again, I mean, consequences to the natural environment. The Sonoran Desert is the most biologically diverse desert in the United States. It’s home to all kinds of threatened species, including jaguars and Mexican gray wolves, ocelots. So the barrier, any barrier really, has the potential to threaten habitat, food access, access to mates, seasonal migration, what happens when you prevent species from moving. So I think that that is something really important to note, and it’s a place where the environmental community, the human rights community and the indigenous communities have really come together against border militarization for these reasons.

JJ: Just to follow up on that, I know you’ve also written about the particular impact on indigenous communities there, who are especially affected by some of these environmental changes.

I spoke with one activist, April Ignacio, who is awesome. And she told me all kinds of stories about tribal members who are pulled over by the Border Patrol while collecting basket-weaving materials, or harvesting saguaro fruit in the summertime, or hunting for ceremony. So it has a huge impact on on the tribal communities here.

JJ: So environmental rules being softened or even waived is one of the ways that the border is seen as, and spoken of, as a kind of zone of exception. And then the actions of the Border Patrol would seem to be another.

I just want to ask you, what would you hope for people to understand about the day-to-day effects, the daily life impacts of border militarization and other forms of barrier building, for people living where you live?

DW: I think the impact of this on our daily life is huge. Really specific examples include rural residents and farmers that have to stop at Border Patrol checkpoints just to go to the grocery store, every time they leave their homes.

Again, indigenous people having guns pulled on them while they’re out hunting. There’s a high degree of racial profiling. People of color, again, indigenous communities are most impacted. I always think the about the ACLU, which refers to the border as a “Constitution-free zone,” because the Border Patrol can essentially operate a hundred miles from the border with extra-constitutional powers, beyond just normal law enforcement.

So I think it’s worth noting that the other thing that this does is it leaves our communities to respond to a humanitarian crisis caused by inhumane policy at the federal level.

So our community members are the ones putting water in the desert for migrants who are in distress, and documenting Border Patrol abuses, supporting families who are getting released from detention in the middle of the night. So I think it’s worth noting that most people who live near the border do not support a wall.

JJ: That’s very significant, and I would hope, just finally, something for journalists to follow up on. Are there any things that you would like to see reporters doing more of, or doing less of?

I do think that there is the painting by the Trump administration that the borderlands are just violent and out of control, and there are lots of other things that we are worried about.

JJ: We’ve been speaking with reporter Debbie Weingarten. You can find her article, “We Already Have a Border Wall. It’s an Environmental Disaster,” online at TalkPoverty.org. Debbie Weingarten, thank you so much for joining us this week on CounterSpin.

DW: Thank you so much for having me.