Washington has “no position” on what part of Jerusalem should be controlled by Israel or Palestine, the US State Department said, while still calling the city Israel’s “capital” just days before the relocation of the US embassy.

“We are not taking a position on final status [of Jerusalem] issues, including the specific boundaries of Israeli sovereignty in Jerusalem, nor on the resolution of contested borders,” the State Department said in a statement on Friday. At the same time, in a seemingly contradictory statement, it added that the relocation of the US diplomatic mission “recognizes the reality that Jerusalem is the capital of Israel and the seat of its government.” 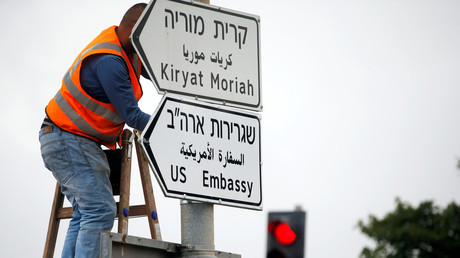 The State Department insists that the relocation of the embassy by no means interferes with the US’ “strong commitment to facilitate a lasting peace deal” between Israel and Palestine, going as far as to say that it is actually “a necessary condition for it.” It also added that the US administration “promises a brighter future for both” Israel and the Palestinians, as it is “firmly committed to pursuing a lasting and comprehensive peace” between them.

The dedication ceremony is scheduled to take place on Monday, May 14, the statement confirmed. The event will be attended by US Deputy Secretary of State John Sullivan, as well as Treasury Secretary Steven Mnuchin, Senior Adviser Jared Kushner and adviser Ivanka Trump.

US President Donald Trump announced his decision to move the US embassy from Tel Aviv to Jerusalem and to recognize Jerusalem as Israel’s capital on December 6, 2017. The move immediately sparked a backlash from Palestine and other countries. Massive protests were held in Turkey, Jordan and Indonesia.

While announcing his decision, Trump said that the US acknowledges “the obvious – that Jerusalem is Israel’s capital.” He made no specific remarks on whether he meant the whole city or its western part. At the same time, he still called on all parties to “maintain the status quo at Jerusalem’s holy sites including the Temple Mount, also known as Haram al-Sharif.” 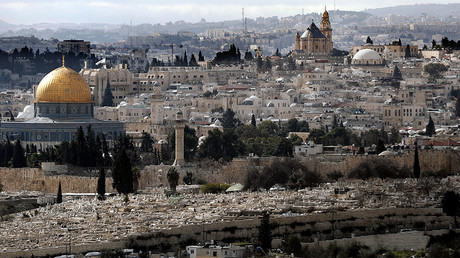 Following Trump’s announcement, Palestinian leader Mahmoud Abbas said that Washington effectively nullified its right to be a peace broker in the Arab-Israeli conflict with this move, which he branded as “deplorable and unacceptable.” Later, Palestinian Foreign Minister Riyad al-Maliki said that Russia could host a potential meeting between Israeli and Palestinian leaders instead.

The status of Jerusalem, which is home to Muslim, Jewish and Christian holy sites, is one of the most contentious issues between the Israelis and Palestinians. The eastern part of the city was captured by Israel in 1967, in a move that was never recognized by the international community. Israel sees the entire city as its rightful capital, while Palestinians consider its eastern part its own “occupied” capital.

However, the US is not the only country that is moving its embassy to the contested city. Paraguay has recently announced that it will also relocate its diplomatic mission to Jerusalem. Earlier, Guatemala said it will open its diplomatic HQ in the city on May 16, just two days after the US.