David Cameron thought Obama was one of the “most narcissistic, self-absorbed people” he ever met, according to the ex-PM’s former strategy chief. The comments come despite the pair’s once notorious “transatlantic bromance.”

Steve Hilton, who was one of Cameron’s closest advisers until they parted ways over his support for Brexit and tougher immigration laws, made the comments during the latest installment of his show, The Next Revolution, on Fox News. In the most recent episode, he defended President Donald Trump against allegations made in a new book that he was mentally unfit for office by railing against previous presidents and their failings. 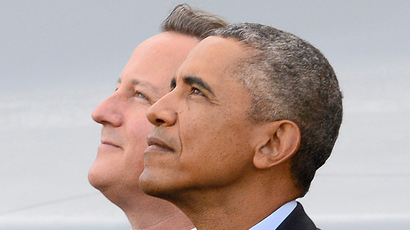 While in office Obama and Cameron were seen as having had a cozy relationship, with pictures taken of the pair high-fiving, playing rounds of golf and grilling burgers in the Downing Street garden. “Yes, he sometimes calls me bro,” Cameron once said of Obama.

Hilton’s comments, however, have cast new light on the friendship between the pair.

“My old boss, former British Prime Minister David Cameron, thought Obama was one of the most narcissistic, self-absorbed people he’d ever dealt with,” Hilton said. “Obama never listened to anyone, always thought he was smarter than every expert in the room, and treated every meeting as an opportunity to lecture everyone else.”

Hilton claimed Obama’s high-handed manner was in part responsible for “real-world disasters” such as the rise of Islamic State (IS, formerly ISIS) and the situation in Syria. “But the real world doesn’t matter to the elites – for them it’s all about style and tone, not substance and results,” Hilton added.

“They can afford to do that because they live in a world of booming neighborhoods, delightful hipster eateries and everyone they know employed in the virtual world of the knowledge economy. They don’t see what’s going on in the actual economy. Whatever his mental state, [Trump] has achieved more for working Americans in one year than his predecessors did in eight, or 16, frankly.”

READ MORE: Did Britain spy on Trump? Tony Blair thinks so… or so he allegedly told a senior White House aide

The claims were immediately shot down by a spokesperson for Cameron, who said they did not reflect his views. “David Cameron’s views on President Obama – whether in public or in private – are the same: he considers Barack Obama a hugely accomplished president, a great partner for Britain and a good friend to our country and to him personally,” the spokesperson told the Guardian.

Trump has been under sustained assault since the publication of the book ‘Fire and Fury’ by journalist Michael Wolff, creating a rising tide of criticism that the president is simply not up to the job. On Monday, it was revealed that a shadow White House diary allocates the president as much as three hours each morning to “executive time,” seized upon by critics as a euphemism for watching TV and tweeting.