After more than two years of slogging through Minnesota’s regulatory process, Canadian oil company Enbridge is giving up the ghost of the Sandpiper Pipeline Project. The energy giant asked the state to pull the plug on the pipeline.

On Thursday, Enbridge Energy Partners (EEP) filed documents asking Minnesota to end regulatory proceedings for the Sandpiper Pipeline Project, which called for the construction of a 616-mile (991-km) crude oil pipeline that would have carried 375,000 barrels per day from the Bakken Fields near Tioga, North Dakota, across Minnesota and to Superior, Wisconsin. It was expected to cost nearly $2.6 billion, which would have been privately funded.

EEP “will be withdrawing regulatory applications pending with the Minnesota Public Utilities Commission for the Sandpiper Pipeline Project,” the company said in a statement, adding that it “has completed a review of Sandpiper and concluded that the project should be delayed until such time as crude oil production in North Dakota recovers sufficiently to support development of new pipeline capacity.”

That capacity won’t likely be needed for at least five years, EEP predicted. If and when it is needed, the company will have to start the regulatory process from scratch ‒ something EEP has long criticized, according to the Minneapolis Star Tribune. 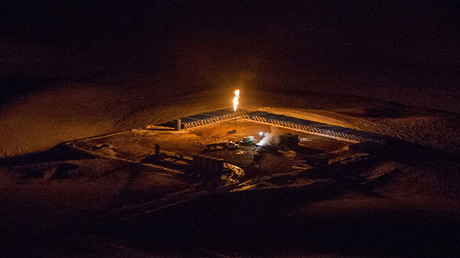 “Extensive and unprecedented regulatory delays and procedural irregularities have plagued the Sandpiper project since applications were filed nearly three years ago,” EEP President Mark Maki told reporters. “The business, competitive and market environment is very different now than it was at the time when we applied for regulatory approval of the Sandpiper project back in 2013.”

The announcement came after the Minnesota Department of Commerce notified the company last week that it was effectively suspending work on the required environmental-impact statement until EEP clarified its intentions for the project, the Minneapolis Star Tribune reported.

A large part of the problem is depressed oil prices over the last two years, when prices dropped from $114 a barrel in 2014 to $27 in January. At the beginning of 2015, Goldman Sachs predicted that low prices could curtail a number of shale projects, mostly in the US, cutting oversupply, and contributing to further price stabilization. The bank said that, if prices remained around $40 a barrel, it would curb the US shale boom.

Although oil prices have risen of late ‒ they were up 20 percent in August ‒ the current price of $50 a barrell was not enough to save the Sandpiper Pipeline.

Enbridge Inc., EEP’s parent company, will instead invest $1.5 billion in the Bakken Pipeline System, a transaction it announced at the beginning of August.

“This acquisition of an interest in the Bakken Pipeline represents another important step in expanding our market access strategy,” said Al Monaco, Enbridge’s president and CEO.

The Bakken Pipeline is a system comprised of the Dakota Access Pipeline and the Energy Transfer Crude Oil Pipeline. It will transport oil from the shale fields in North Dakota to Patoka, Illinois and then on to the Gulf of Mexico.

Enbridge’s bet on the Bakken Pipeline may not pay out the way the company hopes. Construction has been halted on the Dakota Access Pipeline amid protests by the Standing Rock Sioux Tribe. Demonstrations against the pipeline have spread nationwide and garnered celebrity attention.

If fully constructed, the Dakota Access portion of Bakken would travel through the four states of North and South Dakota, Iowa and Illinois. Despite the current battles, however, Enbridge doesn’t expect the project to be delayed.

“Dakota Access is very far along in the process,” Maki said. “They are running according to schedule.”

The Sandpiper Pipeline Project also faced protests, especially from environmentalists who said it would have threatened ecologically sensitive areas and from Native American tribes living along the route it would have taken. In a 2014 study, the Minnesota Pollution Control Agency found that the proposed path of the Sandpiper would have crossed 28 rivers, lakes and wetlands that couldn’t be reached by nearby roads.

“We always thought it was a bad idea for them to put a Bakken oil pipeline through Minnesota’s headwaters lake country,” Richard Smith, president of Friends of the Headwaters, which opposed the pipeline, told Minnesota Public Radio. “And they finally acknowledged that.”

If the Sandpiper Pipeline had gone according to its original plan, it would have been in operation this year.