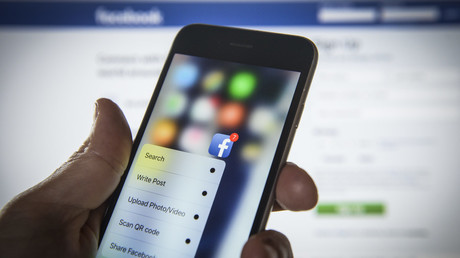 Just imagine – an RT journalist, who authored a book on psychological warfare on social media and has instructed a foreign army unit on how conduct operations on Facebook. Relax and change “RT” for “Daily Beast,” false alarm.

When it comes to exposing all-pervasive ‘Russian propaganda’, be it in the form of the notorious ‘troll factory’ or throwing accusations at this very TV channel, few Western outlets are as prolific as The Daily Beast. After all, the ‘Buff Bernie’ meme and RT’s coverage of anti-fracking protest are the reasons why the US has a president separating immigrant children at the border, or so the Russiagate pundits say.

One can only wonder what would happen if an RT contributor went on record to say he had given instruction to an army unit of a close Russia ally on how to better conduct psychological warfare on social media. Expressions like “attack on our freedom” and “Facebook Pearl Harbor” would likely fly around in the Western media.

Well, a contributing editor for The Daily Beast, who literally wrote a book about the social media and their role in modern warfare, says he is “absolutely delighted” after giving a seminar to the British Army’s 77th Brigade, a psych-ops unit dubbed “Facebook warriors” by The Guardian. It was created in 2015 as the UK was catching up with countries like the US and Israel in terms of non-lethal warfare in social media.

Absolutely delighted to spend the day with the British Army’s 77th Brigade (our information warriors), which has devoted a day’s seminar to my book. pic.twitter.com/qRad8bVpQI

The journalist, David Patrikarakos, wrote for other major news outlets, including Politico and The Guardian. The book he wrote is titled “War in 140 Characters: How Social Media Is Reshaping Conflict in the Twenty-First Century” and was released in November last year. The infamous “Russian troll factory”, AKA Internet Research Agency, is, of course, featured in the book.

Somehow it seems there will be no outrage about his seminar in the West. One man’s meddling is another man’s projecting soft power in a digital age, right?