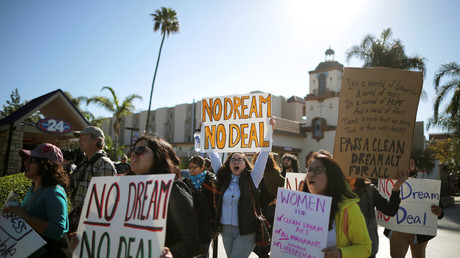 Large protests marked the date that the Trump administration was set to end the DACA program. In Washington, DC, protesters blocked roads around the US Capitol and several demonstrators were arrested.

Protesters swarmed around Capitol Hill on Monday, demanding Congress to pass legislation to protect immigrants who were brought into the US illegally as children. The executive policy, called the Deferred Action for Childhood Arrivals (DACA) program, was enacted by former President Barack Obama in 2012 and revoked by President Donald Trump’s administration in September 2017. March 5 was the deadline for Congress to come up with a legislative solution. That has yet to happen.

Several protesters blocking Independence Avenue the Cannon House Office Building were arrested by US Capitol Police. Activists were also arrested inside the building, where they staged a “sit-in” outside.

Another group of protesters blocked an intersection outside the Democratic National Committee (DNC), accusing the Democrats of being “fake allies.”

A group of Dreamers are blocking an intersection outside the DNC’s HQ, calling Democrats “fake allies.” https://t.co/T4n1Dq5wIq

According to government data, just under 800,000 people signed up for the DACA program, allowing them a renewable two-year stay in the US. In his immigration proposal, Trump offered a path to citizenship for 1.8 million people who qualify for DACA in exchange for border wall funding and abolishing the diversity visa lottery and chain migration. Democrats have denounced the proposal as racist.