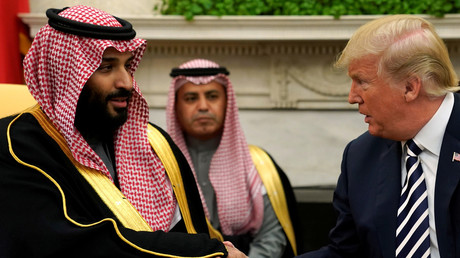 The disappearance of a dissident Saudi journalist in the kingdom’s consulate in Istanbul last Tuesday has offered pundits a golden opportunity to pin the blame on their favorite target: Donald Trump.

The disappearance of Jamal Khashoggi, a US-based self-exiled critic of Saudi regime, is by no means a light matter. His murder has not yet been confirmed, but the accusation is disturbing: Turkish officials have accused the Saudis of murdering the writer at the consulate and smuggling his dismembered body away afterward. Of course, Riyadh has denied the accusation — but has also conveniently claimed they can’t prove he left the consulate because the CCTV cameras just so happened to not be working on the day of his visit.

Despite the gruesome allegation, the case is so far thin on actual evidence — and not everyone is taking the Turkish story at face value. In the absence of much information, speculation has run riot.

Pent up anger at Saudi Arabia is leading to non-critical thinking about the #Kashoggi case. Don’t be sucked in by group mentality and circular thinking. Something not so obvious is at play here. Be smart. Be unexpected. They are.

Could the crown prince order a cold-blooded murder or even a less-brutal kidnapping of his critic? Could Turkey be up to no good in some effort to frame the Saudis for snatching Khashoggi in front of fake cameras? That second theory might stretch credibility, but then again, stranger things have happened.

Regardless of what has actually happened to Khashoggi, pundits in the US were quick to label Trump the real culprit in the mystery — suggesting that Trump’s lack of moral leadership and unwillingness to stand up to the Saudis perhaps convinced King Salman that he could get away with chopping up the body of a dissident in a foreign consulate.

Some of the names cropping up to complain about Trump’s silence and apparent lack of leadership on the matter were quite interesting indeed. Ken Roth, the executive director of Human Rights Watch, for example, was not exactly known for his strong criticism of Riyadh and its relationship with the White House under former president Barack Obama. Nor was Samantha Power when she was the US ambassador to the UN under Obama, who was in power when the Saudi slaughter in Yemen began — and yet, here they are, suddenly joining a chorus of voices outraged over the US’s cozy relationship with the country.

The one government that has the influence to get answers on #Kashoggi is mute. The Trump administration’s loyalty to Saudi Arabia & MBS – given the horrors in Yemen, this & more – is a travesty. https://t.co/L3iKlBLJ9t

Why has Trump administration been silent about the apparent murder of prominent Saudi journalist, Jamal Khashoggi inside the consulate of Saudi Arabia in Istanbul. Khashoggi was a U.S resident, a columnist for the Washington Post & frequent critic of the Saudi regime

When the US administration did finally publicly react to the disappearance of Khashoggi, the statement wasn’t sufficiently dramatic enough for people’s liking. Former US ambassador to the UN Susan Rice in particular took issue with the administration using the word “concerned” about the case. Not strong enough, apparently. Strange, given it’s the very word she used to defend an Israeli military offensive in Gaza in 2014.

Not satisfied to blame Trump for the Saudi journalist’s disappearance, one critic decided to link the incident to the rape and murder of Bulgarian broadcaster Victoria Marinova, suggesting both came as a result of Trump’s critical comments on the media.

Perhaps all the criticism from concerned Trump critics would seem more sincere if it wasn’t so blatantly partisan and opportunistic?