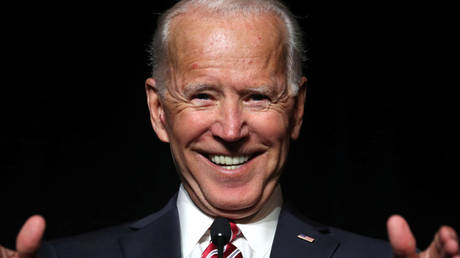 A second woman has come forward to accuse 2020 Democratic presidential frontrunner Joe Biden of creepy almost-sexual harassment, while the former Vice President’s damage control attempts have Twitter up in arms.

“It wasn’t sexual, but he did grab me by the head,” said Amy Lappos, a Connecticut nonprofit worker who met Biden at a political fundraiser in 2009. “He put his hand around my neck and pulled me in to rub noses with me. When he was pulling me in, I thought he was going to kiss me on the mouth.”

Like Lucy Flores, the former Nevada lieutenant governor candidate who wrote in New York magazine about her own brush with Biden, which left her feeling “uneasy, gross, and confused,” Lappos kept her story to herself “because he was the vice president.” But the experience didn’t sit well with her.


Lappos finally decided to come forward after watching the Democratic Party ignore Flores – the same party that nearly brought government to a standstill during the Kavanaugh hearings, screaming to the skies over the need to “believe all women.” Biden and his staff didn’t have “an inkling” that Flores felt “uncomfortable,” the candidate’s spokesperson Bill Russo said, and that was the end of the story.

“There’s absolutely a line of decency. There’s a line of respect. Crossing that line is not grandfatherly, it’s not cultural, it’s not affection. It’s sexism or misogyny,” Lappos told the Hartford Courant, adding that “if Biden truly supports women and gender equality, he would step aside and support one of the many talented and qualified women running” for president.

Biden’s history of uncomfortable interactions with women has been parodied from the bowels of 4chan up to the Washington Post. Despite the high post-#MeToo behavioral standards set for other 2020 candidates – Bernie Sanders was raked over the coals when accusations of sexual harassment were leveled at 2016 campaign surrogates he’d never met, while Beto O’Rourke was called out for joking that his wife raises their kids “sometimes with my help” – Biden has somehow gotten a pass.

Now Russo has hit back at the legions of social media users sharing damning clips of the former VP, calling dozens of videos and photographs of the Democrat smelling women’s’ hair and getting overly familiar a “false narrative” originating in the “dark recesses of the internet.” Russo found a single woman from the trove of photos who was willing to make a public statement in support of Biden, as well as the father of a young girl who was determined to absolve the candidate (a personal friend) of creepiness on his daughter’s behalf, and used their words to condemn the rest of the photographic evidence as “smears and forgeries.”

Twitter begged to differ. After a refresher in Creepy Uncle Joe 101,

users came up with some campaign suggestions,

and some even wheeled out serious political criticism,

Is a few hundred thousand senseless deaths really all it takes to lose the millennial vote? pic.twitter.com/hWcVUG5GmX

The thing about Joe Biden is he’s terrible in every way. Greedy, lazy, corrupt, creepy… and everyone has known it for decades. Yet Obama picked him as VP and Democratic voters like him. I don’t get it.

while the #BidenAMovie hashtag provided some much-needed comic relief.