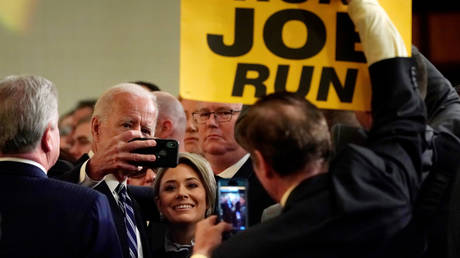 Former US vice president and expected 2020 presidential candidate Joe Biden is now facing accusations of impropriety from a total of seven women, in news which may help scupper his, as yet, unannounced bid for the White House.

Despite issuing a public apology and a promise to “be more mindful about respecting personal space in the future,” four more women have come forward to accuse the highest-polling, though still unofficial, 76-year-old Democratic 2020 presidential candidate.

Vail Kohnert-Yount, Sofie Karasek and Ally Coll all told the Washington Post that Biden had touched them inappropriately and in a way that made them feel uncomfortable.

Also on rt.com
‘My way to show I care & listen’: Biden responds to ‘Creepy Joe’ scandal, vows to be ‘more mindful’


Kohnert-Yount alleges he pressed his forehead against hers, telling her she was a “pretty girl.” Karasek claims he did the same thing to her when she confided in him that a friend had taken her own life when the two met after the 2016 Oscars.

Meanwhile, former Democratic aide Coll alleges he complimented her smile while squeezing her shoulders “for a beat too long.”

Speaking to Fox News @ Night on Wednesday, writer DJ Hill alleges Biden slid his hand down her shoulder at a 2012 fundraiser, a move which made her feel “very uncomfortable.”

Prior to these recent accusations, Biden faced allegations of impropriety by a former Nevada lawmaker and a Connecticut woman who claims he put his hand around her neck and pulled her in to rub noses with her. Opinion is divided on what to make of the spate of allegations.

“I believe them and I respect them being able to tell their story and having the courage to do it,” presidential candidate Kamala Harris (D-CA) said at a campaign event in Nevada Tuesday, adding that Biden must decide for himself whether he will run for president or not.


President Trump, speaking at a National Republican Congressional Committee dinner Tuesday, taunted Biden repeatedly about the accusations, playing up to the crowd of GOP lawmakers.

“We’re going into the war with some socialists,” Trump said of his potential presidential campaign adversaries. “And it looks like the only non sort of heavy socialist, he’s being taken care of pretty well by the socialists.