When it comes to covering protests in other countries, it seems any vague picture of brown people protesting can stand in for those actually on the streets expressing their grievances. Since the outbreak of protests across Iran three weeks ago, several major outlets have used pictures of demonstrations  in the United States, France, or United Kingdom—organized by a fringe, cult-like group, Mojahedin-e Khalq (MEK)—in place of images of the entirely unaffiliated protesters, 6,000 miles away, who are the topic of discussion. 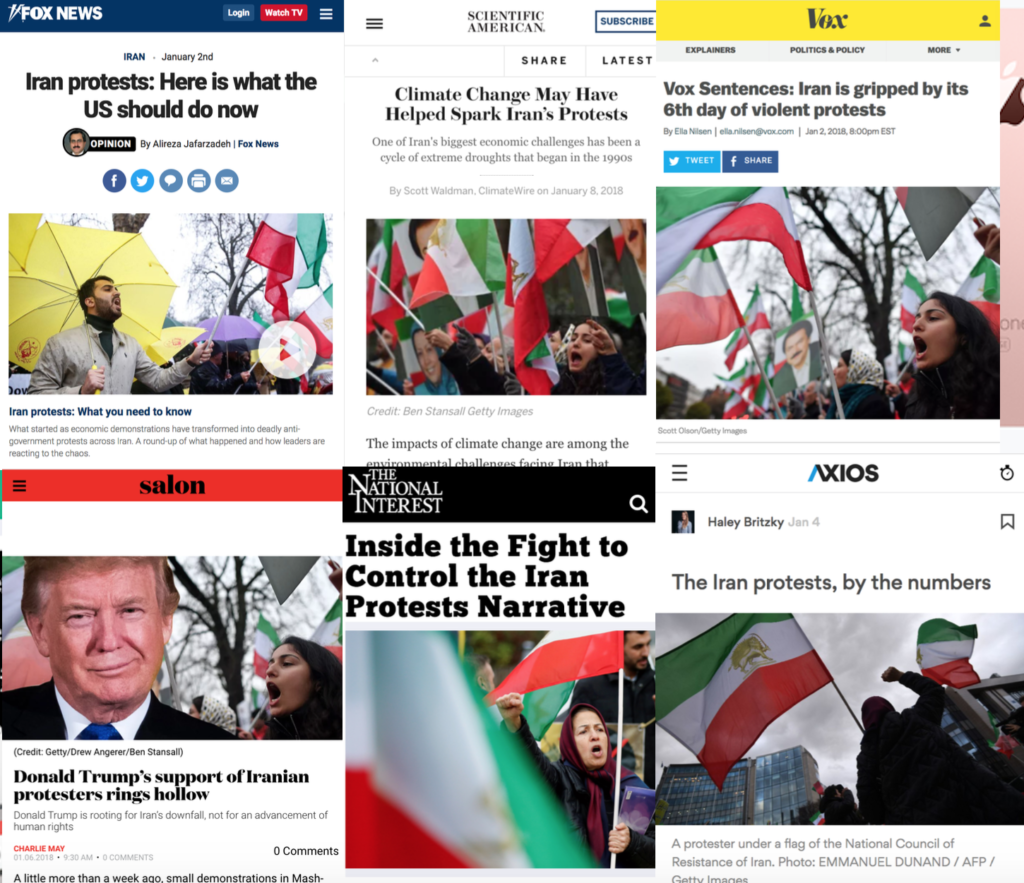 Fox News, Scientific American, Vox, Salon, National Interest and Axios were among the outlets that used unidentified photos of protests not in Iran to illustrate stories about protests in Iran.

These are all images of rallies by the MEK (sometimes known as the People’s Mujahedin, or its benign-sounding front-group name, National Council of Resistance) being presented as protesters in Iran. Several other outlets used their images, but noted they were simply “solidarity” marches in the US or Europe. While this is technically accurate, it’s still wildly misleading, given that it’s safe to assume most people won’t know that the organizers of these rallies are part of a US- and Israeli-aligned fringe group, and not allies of the workers and young people taking to the streets in Iran. 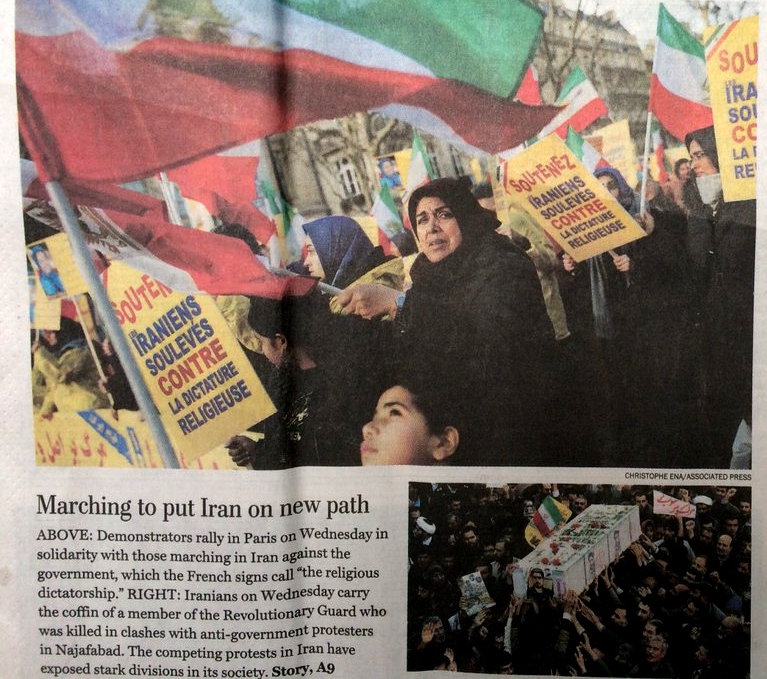 The Washington Post front page (1/4/18) featured a photo of an MEK demonstration in Paris, identified only as “demonstrators…in solidarity with those marching in Iran against the government.” (image: Shervin Malekzadeh)

Casually throwing around MEK images to represent unrest in Iran is the worst combination of insulting and sloppy. It would be like a Chinese outlet, in 2012, using images of a Westboro Baptist Church protest in a story about Occupy Wall Street, because both opposed the US government. The exact ideology of those protesting in Iran isn’t 100 percent clear—they seem to represent a mix of groups and grievances—but MEK has virtually zero support in Iran itself,  having been disowned by the Green Movement (the last major protest movement in Iran) in 2009, and is widely loathed for working with Israeli intelligence and fighting alongside the Iraqi army in Iran’s decade-long war against Saddam in the 1980s that killed a half-million Iranians. The MEK has carried out several bomb attacks in Iran, and was even officially listed by the US State Department as a foreign terrorist organization for 16 years, until it was removed by then-Secretary of State Hillary Clinton in 2012, after a years-long lobbying effort by pro-regime change forces within the US.

The only major media faction that even pretends the MEK has any legitimacy within Iran is the Murdoch group, which routinely runs MEK’s blatant disinformation (Fox News, 1/1/18) and pro-regime change op-eds (Wall Street Journal, 1/8/18). Even consistent regime change partisans, such as Bloomberg’s Eli Lake (1/2/18), warn against promoting MEK:

People’s Mujahedin leader Maryam Rajavi, or supporters of the Pahlavi dynasty that fell in 1979, should not be treated as leaders or spokesmen for this organic uprising. They seek to impose an agenda on a movement they did not create. Don’t let them do it.

No intellectually honest person takes MEK seriously as a viable alternative to the current government in Iran. The idea that it is an actual “Iranian opposition” is a Western media fiction. But the group’s rallies outside Iranian embassies provide great visual fodder for indifferent or dishonest editors in need of high-quality “Iran protest” images—without the mess of actually paying Iranian photographers, or dissecting the on-the-ground political reality in Iran.