The Justice Department is going Hollywood as a way to recover $540 million in assets that the US government says were stolen from Malaysia’s troubled state fund. The DOJ is seeking to acquire the rights to movies linked to fraud as part of a corruption probe.

On Thursday, the DOJ announced it was filing civil forfeiture complaints to recover about $540 million in assets “associated with an international conspiracy to launder funds misappropriated from a Malaysian sovereign wealth fund.” The fund, known as 1Malaysia Development Berhad (1MDB), was created by the Malaysian government to promote economic development in the country.

The Justice Department accuses officials at 1MDB, their relatives and associates, of being part of a conspiracy to divert more than $4.5 billion from the government fund, laundering the money through a series of complex transactions and shell companies with bank accounts around the world, including in the US.

“These cases involve billions of dollars that should have been used to help the people of Malaysia, but instead was used by a small number of individuals to fuel their astonishing greed,” Acting US Attorney Sandra Brown said in a statement.

“The misappropriation of 1MDB funds was accomplished with an extravagant web of lies and bogus transactions,” she continued. “We simply will not allow the United States to be a place where corrupt individuals can expect to hide assets and lavishly spend money that should be used for the benefit of citizens of other nations.”

As part of those civil forfeiture complaints, the DOJ hopes to acquire the rights to several films, most notably for “Dumb and Dumber To,” the sequel to the infamous 1994 Jim Carrey and Jeff Daniels comedy. The company that produced that film, Red Granite Pictures, was named in the government’s complaint. 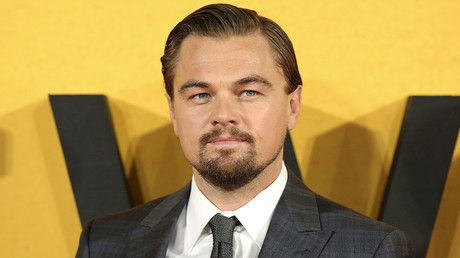 Red Granite is accused of using money to make “Dumb and Dumber To” with money traceable to foreign corruption. The company’s CEO, Riza Aziz, is the stepson of Malaysian Prime Minister Najib Razak, who is believed to be the mastermind behind the money-laundering. Other movies by Red Granite that were mentioned in Thursday’s and in previous complaints include “Daddy’s Home” and “The Wolf of Wall Street.”

The embezzlement reportedly began in 2009, when 1MDB officials used approximately $1 billion meant to be invested to exploit energy concessions to instead buy art, jewelry, real estate and yachts, as well as to pay gambling expenses and hire musicians and celebrities to attend parties.

In 2014, 1MDB borrowed more than $1.2 billion from banks, and $850 million of that money was instead diverted to offshore shell companies. That money, along with money previously stolen or laundered, was used to buy, among other things, a “300 foot luxury yacht valued at over $260 million, certain movie rights, high-end properties, tens of millions of dollars of jewelry, and artwork,” the DOJ complaint said.

Other assets that the US government is looking to seize, as part of its Kleptocracy Asset Recovery Initiative, include a rare movie poster of “Metropolis” purchased by Aziz for $1.2 million in October 2012 and artwork gifted to actor Leonardo DiCaprio ‒ specifically a Pablo Picasso painting purchased for $3.28 million, a photograph by Diane Arbus purchased for $750,000 and a Jean-Michel Basquiat collage purchased for $9.19 million.

DiCaprio has voluntarily surrendered an Oscar awarded to Marlon Brando to the US government given to him by Red Granite, as well as the three pieces of art, according to the Hollywood Reporter. The actor starred in “The Wolf of Wall Street.” He has been cooperating with the DOJ since July 2016.

“Prior to the government’s filing of the civil pleading today, Mr. DiCaprio initiated return of these items, which were received and accepted by him for the purpose of being included in an annual charity auction to benefit his eponymous foundation,” DiCaprio’s spokesperson said in a statement. “Mr. DiCaprio is grateful for the support of the government in this effort and continues to hope that justice is done in this matter.”

President Donald Trump reportedly has debts to both the Bank of China and Goldman Sachs, who have been subpoenaed by the DOJ over dealings with Malaysian state fund 1MDB.